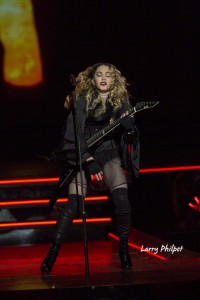 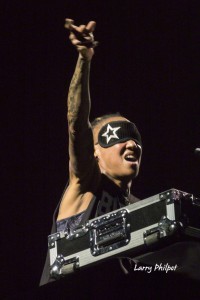 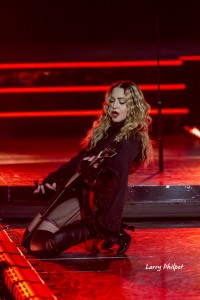 The Madonna concert in Louisville Saturday night had a starting time of 8PM, with no mention of her opening act, DJ MaryMac spinning for hours before Madonna graced us with her presence.  A tip of the hat to DJ MARYMAC, who had more energy than Madonna.

As it turned out, this wasn’t a concert — it was a SHOW. Two and a half hours late, Madonna entered the stage with the presence of a Diva and all the trappings and symbolism of the Illuminati, which is more about elitism than mystery, and frankly it’s getting old (note to Katy and Bey).

There is some speculation that the Material Girl may have been under the influence, and we wondered the same thing. With slurred speech, and perfunctory moves, it’s a good thing the dancers were there, perhaps to keep her from falling. Add to that, a pandering, southern accent that was so bad, it sounded like she didn’t know what city she was performing in. That can be excused, but the phony accent cannot.

The production and costumes were fabulous. The dancers gave on point performances. During one number, Madonna selected some of them to show the audience their six packs, including one woman who not only opened her shirt to reveal some serious muscles, but was topless as well. The dancers did a reprise of this spectacle in a rather racy scene with four beds, holding various combinations of males and female occupants. The LGBT community was well represented onstage and in the audience — which was a spectacle in itself. Everyone seemed to be there to have a good time and “get into the groove.” During this “show us your six pack” portion, Madonna made a tongue in cheek reference, “Can you imagine if I had a six pack?” I’m thinking she did, maybe even a 12 pack. 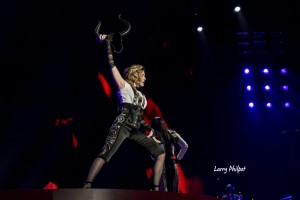 Two songs of notable enjoyment were, “La Isla Bonita”, a Latin themed number with the dancers dressed in beautiful costumes, representing bulls, and matadors. This number seemed more of a freaky homage to the Illuminati god, Baphomet, than a bullfight. She also excelled in a “La Vie En Rose”, which she sang in French so perfectly I had to wonder if it was lip synced. Like any ‘SHOW”, the production is so elaborate the audience might have missed that Madonna was not even on stage during many of the dance numbers, although the songs were from Madonna’s vast library.

On a positive note, she IS Madonna, and that alone commands respect.  She looks flawless. At 57, she appears 35, even close up. The costumes are couture fabulous and the production and choreography is amazing. Even running late, the show wasn’t cut short. It was a full and entertaining 2 hours and 30 minute “SHOW”. Although, DJ Mary Mac can spin with the best of them, much of the audience I spoke with didn’t appreciate paying to listen to someone spin music and wait a full hour before the star decided to come to work. Madonna’s security staff were strict, and the staff at YUM!, specifically Sandra Moran, Deanna Southerling and Kevin Washam, are quite simply some of the most professional in the U.S., and are to be commended. The elaborate sets, the choreography, and visuals lifted this show from bad to mediocre. 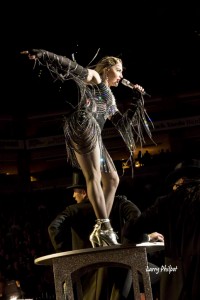 To confirm that I wasn’t the only one to believe this performance merited low marks, I asked five people of different ages to grade the show like a report card. A woman in her 30s, who explained that she used to go to school dressed like Madonna gave her a “B”, but then said maybe she’d spent too much time on her phone during the “SHOW”, but a “B” was the highest.