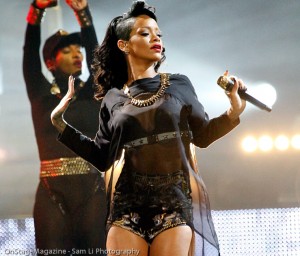 Famed Musical Acts to Play Free, Open to the Public Concerts at the

Performances Will Be Livestreamed on NCAA.com for the First Time

Indianapolis, IN (March 16, 2014) – NCAA and Turner Live Events, alongside official NCAA Corporate Champions AT&T, Coca-Cola and Capital One® have announced all-star musical acts for the 2015 NCAA March Madness Music Festival in conjunction with the 2015 NCAA Men’s Final Four®.  The free, three-day music festival will be held at White River State Park in Indianapolis, IN and is produced by Turner Live Events.  The celebration is set to begin Friday, April 3 at the AT&T Block Party, with musical acts to be announced soon.  Multi-platinum artist Rihanna hits the Coke Zero™ Countdown Concert stage as headliner, with critically acclaimed band Bleachers also performing Saturday, April 4. A portion of Rihanna’s performance will air between that day’s semi-final games airing on TBS, TNT, TruTV, and via NCAA March Madness Live. Her new single “American Oxygen” is currently being used for March Madness promos, serving as the tournament’s musical backdrop. The weekend will close on Sunday, April 5 with Grammy Award-winning, multi-platinum artists Zac Brown Band and Lady Antebellum along with Grammy Award-winning country star Kacey Musgraves at the Capital One JamFest.  Part of headliner Zac Brown Band’s performance, which will include music from their forthcoming album ‘JEKYLL + HYDE’ (out 4.28.15), will also be featured during Capital One Championship Central, the National Championship pregame show airing at 8:30 p.m. on CBS.

For the first time ever, the 2015 NCAA March Madness Music Festival will also live stream this year’s concerts, offering fans around the world unprecedented access to some of today’s hottest musical acts.  The footage will be live streamed at http://www.ncaa.com/musicfest. This site will be updated leading up to the festival with the latest announcements and details. Fans can also stay updated by following @FinalFour and @MarchMadness on Twitter.

This is a non-ticketed event open to the public on a first-come basis and will feature the following events:

Turner Sports and CBS Sports will provide live coverage of all 67 games from the 2015 NCAA Division I Men’s Basketball Championship across four networks – TBS, CBS, TNT and truTV. For the second year in the event’s 77-year history, the 2015 NCAA Division I Men’s Basketball Championship National Semifinals will be presented live across three networks – TBS, TNT and truTV – to provide fans with a variety of viewing options for this marquee event. For the 34th consecutive year, CBS will broadcast the NCAA National Championship game in 2015.

“Capital One is once again excited to bring such great talent to this year’s Final Four,” said Roger Ferguson, Managing Vice President, Brand Advertising, Media and Sponsorships at Capital One. “Every year we look for unique opportunities to provide the ultimate experience to fans at the Final Four, whether that’s through music at our Capital One JamFest or through our presenting sponsorship of the NCAA Final Four Fan Fest. This year we’re offering exclusive benefits to our cardholders throughout Final Four weekend, including two free tickets to the NCAA Final Four Fan Fest and a separate VIP entry line for our cardholders at Capital One JamFest.”

“The Coke Zero™ Countdown Concert is a premiere experience for college basketball’s most passionate fans – where rivals come together in order to see their favorite artists and enjoy the biggest party of the NCAA Men’s Final Four,” said Ivan Pollard, SVP, Connections, Coca-Cola North America. “Coke Zero is proud to partner with the NCAA and Turner Sports to present a solid line up of musical talent that includes three acts famous for their individuality and energetic performances. With Coke Zero and these talented musicians, there’s no better way to build anticipation and work up a thirst for Saturday’s semifinal games.”

NCAA March Madness Music Festival has attracted hundreds of thousands of music fans to watch performers most recently including Bruce Springsteen and the E Street Band, Jason Aldean, fun., Tim McGraw, The Killers and LL Cool J. Other past performers include Sting, Dave Matthews Band, Muse, The Kings of Leon, Jimmy Buffett, KISS, The Black Keys, Kenny Chesney, Taylor Swift among many others.  The NCAA March Madness Music Festival is an activation extension of the NCAA’s Corporate Champions and Partners marketing program, which Turner Sports and CBS Sports license and collaborate on as part of a 14-year multi-media agreement with the NCAA.
“We’re excited to bring a fabulous free concert like the March Madness Music Festival to Indianapolis so all fans, including those who may not have tickets to the games, are able to enjoy the fun and exciting atmosphere surrounding NCAA Final Four weekend,” said Keith Martin, NCAA Managing Director of Marketing and Broadcast Alliances.  “I want to thank AT&T, Capital One and Coke Zero for their support of Final Four weekend and the NCAA student-athletes who will compete in the semifinal games and the championship.”

About The Coca-Cola Company

The Coca-Cola Company (NYSE: KO) is the world’s largest beverage company, refreshing consumers with more than 500 sparkling and still brands.  Led by Coca-Cola, one of the world’s most valuable and recognizable brands, our Company’s portfolio features 20 billion-dollar brands including, Diet Coke, Fanta, Sprite, Coca-Cola Zero, vitaminwater, POWERADE, Minute Maid, Simply, Georgia, Dasani, FUZE TEA and Del Valle.  Globally, we are the No. 1 provider of sparkling beverages, ready-to-drink coffees, and juices and juice drinks.  Through the world’s largest beverage distribution system, consumers in more than 200 countries enjoy our beverages at a rate of 1.9 billion servings a day.  With an enduring commitment to building sustainable communities, our Company is focused on initiatives that reduce our environmental footprint, support active, healthy living, create a safe, inclusive work environment for our associates, and enhance the economic development of the communities where we operate.  Together with our bottling partners, we rank among the world’s top 10 private employers with more than 700,000 system associates.  For more information, visit Coca-Cola Journey at www.coca-colacompany.com, follow us on Twitter at twitter.com/CocaColaCo, visit our blog, Coca-Cola Unbottled, at www.coca-colablog.com or find us on LinkedIn at www.linkedin.com/company/the-coca-cola-company

Capital One Financial Corporation (www.capitalone.com) is a financial holding company whose subsidiaries, which include Capital One, N.A., and Capital One Bank (USA), N. A., had $205.5 billion in deposits and $308.9 billion in total assets as of December 31, 2014. Headquartered in McLean, Virginia, Capital One offers a broad spectrum of financial products and services to consumers, small businesses and commercial clients through a variety of channels. Capital One, N.A. has branches located primarily in New York, New Jersey, Texas, Louisiana, Maryland, Virginia and the District of Columbia. A Fortune 500 company, Capital One trades on the New York Stock Exchange under the symbol “COF” and is included in the S&P 100 index.Capital One, an NCAA Corporate Champion, began its affiliation with college sports with the sponsorship of the Capital One Bowl (formerly the Florida Citrus Bowl) in 2001. Since that time, Capital One has sponsored programs including the Capital One Mascot Challenge and Capital One Academic All-America Program. In 2010, it created the Capital One Cup to recognize the best men’s and women’s Division 1 College Athletics Programs in the country and awards a combined $400,000 in student-athlete scholarships. As an NCAA Corporate Champion, Capital One supports all 89 NCAA Championships. In 2014, Capital One became an official sponsor of the Capital One Orange Bowl and the new College Football Playoff.

The NCAA is a membership-led nonprofit association of colleges and universities committed to supporting academic and athletic opportunities for more than 460,000 student-athletes at more than 1,000 member colleges and universities. Each year, more than 54,000 student-athletes compete in NCAA championships in Divisions I, II and III sports. Visit www.ncaa.org and www.ncaa.com for more details about the Association, its goals and members and corporate partnerships that help support programs for student-athletes.  The NCAA is proud to have the following elite companies as official Corporate Champions—AT&T, Capital One and Coca-Cola—and the following elite companies as official Corporate Partners—Allstate, Amazon (Kindle), Bing (Microsoft), Buffalo Wild Wings, Buick, Burger King, Enterprise, Infiniti, LG, Lowe’s, Nabisco, Northwestern Mutual, Reese’s (Hershey’s), Unilever and UPS.