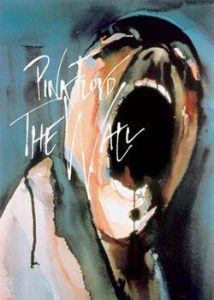 Pink Floyd’s “the Wall” is arguably one of the most intriguing and imaginative albums in the history of rock music. Since its release in 1979, and the subsequent movie of 1982, the Wall has become synonymous with, if not the very definition of, the term “concept album.” Aurally explosive on record and visually explosive on the screen, the Wall traces the life of the fictional protagonist, Pink Floyd, from his boyhood days in war-torn England to his self-imposed isolation as a world-renowned rock star, leading to a climax that is as questionably cathartic as it is destructive. From the outset, Pink’s life revolves around an abyss of loss, and isolation. Born to a war-ravaged nation that takes his father’s life in the name of “duty,” and an overprotective mother who lavishes equal measures of her love and phobias onto her son, Pink chooses to build a mental wall between himself and the rest of the world so that he can live in a constant, alienated equilibrium free from life’s physical and emotional troubles. Every incident that causes Pink pain is yet another brick in his ever-growing wall: a fatherless childhood, a domineering mother, a country whose king signs his father’s death certificate with a rubber stamp, the superficiality of stardom, an estranged marriage, even the very drugs he turns to in order to find release. As his wall nears completion, each brick further closing him off from the rest of the world, Pink spirals into a void of insanity, cementing in place the final brick in the wall. Yet the minute it is complete, Pink begins to realize the adverse effects of total mental isolation, helplessly watching as his fragmented psyche coalesces into the very dictatorial persona that antagonized the world during World War II, scarred his nation, killed his father, and thereby defiled his own life from birth. Culminating in a mental trial as theatrically rich as the greatest stage shows, the story ends with a message that is as enigmatic and circular as the rest of Pink’s life. Whether it is ultimately viewed as a cynical story about the futility of life, or a hopeful journey of metaphorical death and rebirth, the Wall is certainly a musical milestone worthy of the title “art.”