What is a Producer?

What Is A Producer? 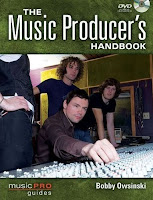 The term “producer” sometimes confuses people. What exactly does that mean? What does a producer do? Here’s a short excerpt from The Music Producer’s Handbook that explains the many responsibilities that a typical music producer has.

“Everyone on the production team usually has a pretty clear-cut job description except for the producer. Everybody knows what a drummer or guitar player or singer does because it’s pretty obvious. An engineer selects and places the microphones, gets sounds, records and balances them, and is in charge of the technical aspects of recording. Songwriters create the rhythm, melody and lyrics to the song (although occasionally that can get a little nebulous as well). But if you were asked the question, “What does a producer do?”, you might be hard pressed to come up with a specific answer.
It’s easy to see why many musicians can’t answer that question because producers in music, television and film take on so many roles. Some are honorary and some are extremely hands-on creatively, yet a producer does his job mostly out of the public eye so those duties aren’t in our every day consciousness.
But a music producer in the most basic description is different from his similarly named film and television counterparts (where a “line” producer and “coordinating” producer are specific jobs), because the producer on a musical project is many job descriptions rolled into one.
He’s the creative director. Just like the director on a movie has the overall vision for that movie and is the boss on the set, so is the producer in the studio. The producer sees the big picture in terms of how all the songs of the album fit together into a cohesive package, but can also control the day to day minutiae of how a part is played or even what the notes are in that part and how they’re played.
He’s a diplomat. A big part of the producer’s job is to bring harmony to the creative process so that everyone can create at their very highest level. Although some producers have used terror as a method to get what they want (the legendary Phil Spector for one), most successful producers make everyone feel safe about contributing and make the environment comfortable for creativity.
He’s a decision maker. A good producer will be the final decision maker in any creative argument (especially between band members). Even if the producer defers to the artist’s creative vision (which most producer’s will do), it’s still his decision to defer.
He’s a go-between. The producer keeps the pressure from a record label or the outside world away from the artist or band while making the record. In some cases, he may speak for the artist during a session with studio musicians, and generally shield the artist from anything she might deem uncomfortable.
He’s a financier. The producer is responsible for the budget. He makes the deals with the studio, engineer, mixer, mastering studio, rentals, studio musicians, arrangers, songwriters, food delivery and anything else that might need to be negotiated or paid. In some cases, he’ll also administer union contracts and submit cue sheets as well.
He’s a casting director. A good producer will choose the right group of musicians to get the feel that the artist is looking for, which might change from song to song. He might even help choose material for the artist that best showcases her musical attributes.
He’s a project manager. A good producer knows just what needs to be accomplished in a given amount of time and for a given budget. His job is to turn in the project on-time and on or under budget and he must manage each project accordingly.
He’s the “bus driver.” No matter how or on what level a producer is involved, he’s the one that sets the direction for the project. He determines the artist’s artistic vision and helps her achieve it, or may even help her find it with a vision of his own. Either way, he’s the leader that everyone will follow. He “drives the bus.”
He’s the one responsible. In the eyes of the record label and artist, the success of the project is the direct responsibility of the producer. Although the public will judge the artist on the project, ultimately how it turns out falls squarely on the producer’s shoulders.”