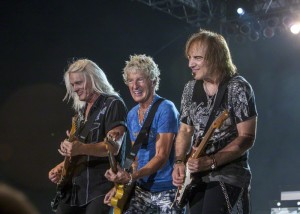 Emens Auditorium in Muncie, IN

TICKETS: Reserved tickets go on sale Friday, December 20 at 10:00 a.m. at the Emens Auditorium box office, all Ticketmaster outlets, charge-by-phone at (800) 745-3000 or online at Ticketmaster.com.

The upcoming REO Speedwagon shows in Rosemont, IL (1/18); Normal, IL (2/6); Muncie, IN (2/7); and Effingham, IL (2/8) will all have charity involvement to benefit Rock To The Rescue. Rock To The Rescue recently raised more than $400,000 to benefit victims of the Midwest tornadoes and storms. At this show, a portion of proceeds will benefit the charity; plus, the band will hold memorabilia and instrument raffles or auctions, and donations will be accepted. The charity will distribute funds raised from this performance to Midwest Food Bank, Peoria Citizens Committee for Economic Opportunity, Tazwood Community Services, Toys for Tots and the Washington Community Bank in care of City of Washington Tornado Relief Fund.

Rock To The Rescue originally started in 2001 as a result of the 9/11 terrorist attacks and is the brainchild of REO SPEEDWAGON’s Kevin Cronin and STYX’s Tommy Shaw.  The two musicians brought together bands and artists such as Bad Company, Journey, Survivor, Kansas, Lynyrd Skynyrd and many others to be part of “Volunteers For America” concert events in Dallas and Atlanta that ultimately raised over $775,000 for victims of 9/11, as well as the Port Authority police department in New York City.   On the bands’ last tour together, the Midwest Rock N’ Roll Express, Rock To The Rescue not only raised thousands of dollars for local charities at each tour stop, but also raised $108,000 which went directly to the Boston One Fund, helping victims of the Boston Marathon bombings.

REO SPEEDWAGON Formed in 1967, signed in 1971, and fronted by Cronin since 1972, REO SPEEDWAGON has rocked to the top of the charts with a RIAA-certified 22 million albums sold in the U.S., 40 million around the globe, and a string of gold and platinum records.  The group’s nine-times certified platinum Hi Infidelity spent 15 weeks in the #1 slot. Thirty–plus years later, Cronin and bandmates Bruce Hall (bass), Neal Doughty (keyboards), Dave Amato (lead guitar) and Bryan Hitt (drums) are still electrifying concert audiences across the nation.  Live at Moondance Jam – the band’s hit-filled performance from the country’s premier classic rock festival, was released in both a Blu-ray and a deluxe edition (containing a CD and DVD in a glossy digipak) on November 19th.  Recently, REO unveiled the band’s “Great Chicago Fire Hydrant” as part of a citywide Chicago public art installation project. On December 4, these were auctioned, with proceeds benefitting 100 Club Chicago.