If you are a die hard Fogerty fan, you should click away now.  I too was in that camp until last night in Indianapolis, where I got a look behind the curtain. Last warning, go now.

Last night’s show in Indianapolis started out like many shows have this season in the midwest, with rain in the forecast, and cloudy. Just a bit before showtime, the announcement came on telling us to go seek shelter, either in the garage or somewhere safe and they’d notify us with updates.

There wasn’t time for me to make it to the garage before the storm hit, and while getting under a tree isn’t the safest place when there’s lightning, it had to do.

The rainstorm was driving and most of us were soaked. My wallet and it’s contents were wet, my ticket was saturated and trying to remove it from my pocket ripped it in half. And I was cold.
Not just cold but shivering, I was still determined to have a good time, even though when I first arrived at the venue, I was met at the gate by my long time friend and Live Nation rep, who needed to see my ID. What? For eight years, I’ve known this man, but it seems that the tour must be worried about some unauthorized person taking photos. After taking a photo of my driver’s license and a business card, I was told that the tour still had the photo passes and we should be getting them shortly, and they needed to look my ID over, etc. In the age of ID theft, I’m not exactly sure how great of an idea it was to give a touring production a photo of my driver’s license, and besides, the photo release already had a clause where they could use any photo of OURS that they wanted, for free.

Completely drenched and wearing a vinyl bag over my head, and hoping my camera gear wasn’t damaged, I wanted to see about dryer clothes, but wanted to see Fogerty in concert so badly that I wandered over to the merchandise tent to find a shirt or a sweatshirt to keep warm. “Sticker shock” took on new meaning when I saw a thin hoodie was $70. There were $39 long sleeve Tshirts, and also flannel shirts that were priced in the stratosphere $70.– but you got a free guitar pick if you bought one of those. Yep, attached to the shirt was a big printed card showing a picture and touting “Free guitar pick”, which probably cost more to print than the 15 cent guitar pick.

The real shocker were signed album covers for ony $150 each. While I was trying to decide if I was cold enough to blow $70 on a hoodie made in China, probably by a ten year old who wears a smog mask to work her 10 hour shift, I was also told that they had autographed baseballs for $100. I had to wonder if it was Fogerty’s autograph, or if “signed” just meant someone signed his name. There’s so much signed merch on the tour and on his website  ,http://www.johnfogertymerchandise.com/autographs.html?limit=15  it would seem like he spends more time autographing stuff than performing. I’m surprised he wasn’t selling signed copies of the moon for about $50, but it doesn’t stop there.

The rain paused and the Live Nation people were scrambling with 4 X 8 sheets of plywood to cover puddles that may be muddy or cause someone to fall. 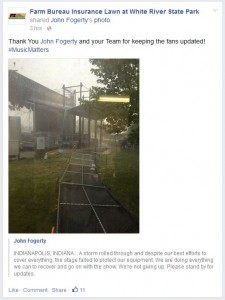 This Facebook posting came in, presumably from someone in the Fogerty camp talking about how the “stage” didn’t protect his equipment and some of it was damaged. I’m not sure who’s responsibility it is to protect his equipment, but there’s a photo too so you can draw your own conclusions of who he didn’t exactly blame.

Around 9:45 pm, for a show that was supposed to start at 8:15, a few of us were under a vacant vendor tent looking at weather maps on different cellphones. More rain was headed our way, and I posted to FB that it’s coming again. The weather maps told us we had about 35 minutes before it hit us again. We all knew, or should have known if you have a smart phone, that rain was coming, but Fogerty was going to start the show anyway.

There were four photographers standing by the tour bus, still waiting for our photo passes from the tour rep when the show started. I guess Live Nation, who puts on thousands of shows a year just couldn’t be trusted to hand out the photo passes to cold, wet professional photographers who’d been in the rain for two hours, and more rain on the way. Here’s how this works: Most photographers are paid on results. No photos, or often no “good” photos, then you don’t get paid.

Song #2 starts, and the Live Nation rep came to us and apologized that the Tour Rep with the photo passes can’t be reached, and he couldn’t let us do any photography without passes. This wasn’t a canned apology, this man knows every one of us personally, and I know he truly felt bad for us, and masked his thoughts about the tour. If we had reviewer tickets, we could go ahead to our seats, but those without tickets seemed to be headed home, most likely earning nothing for standing in wet clothes for hours, possibly damaging camera gear that costs thousands of dollars.

My opinion is Dick Fogerty was more concerned about getting paid than the safety and comfort of the audience. I’m sure he’d take exception to that remark, but who starts a show when rain is expected in 35 minutes after complaining that his equipment was damaged from the rain? Anyone? Anyone? Bueller? Of course I don’t know the particulars of this particular deal, but I’m betting if the show didn’t at least start, refunds would need to be issued.

So, the show is into it’s third song, and I wandered down to the VIP area to my seat, but stood in front of the pit area on the left side facing the stage, and saw a young woman ON the stage photographing the performance from the other side. She was hunkered down behind a big crate so maybe not everyone saw what was really happening. For the first at least half of the show before the rain drove us out, Fogerty performed for this young woman with her camera, and the audience was secondary. His guitar rifts and action moves seemed clearly for this woman’s photoshoot, with his back to where I was standing. Maybe she was his daughter, maybe not, but I felt that he ignored the left side, and much of the front of the stage for several songs.
Were it not for world legend drummer Kenny Aronoff, I’d give this show an F- , but I have nothing but good things to say for one of the greatest drummers in the world and one of the nicest guys in the business. Sadly, even the presence of the great Kenny Aronoff couldn’t save this show.

Here’s my opinion and summary of this performance: What I saw was an artist with unbridled greed and little regard for the safety and comfort of his fans, and photographers who had their personal ID cataloged by the tour, only to be later ignored and who ended up wasting their unpaid evening. If you want to revisit the Credence experience, the show to see is Credence Clearwater Revisited, where you get the same music performed by Stu Cook and “Cosmo” Clifford — two original members who really appreciate the audience.