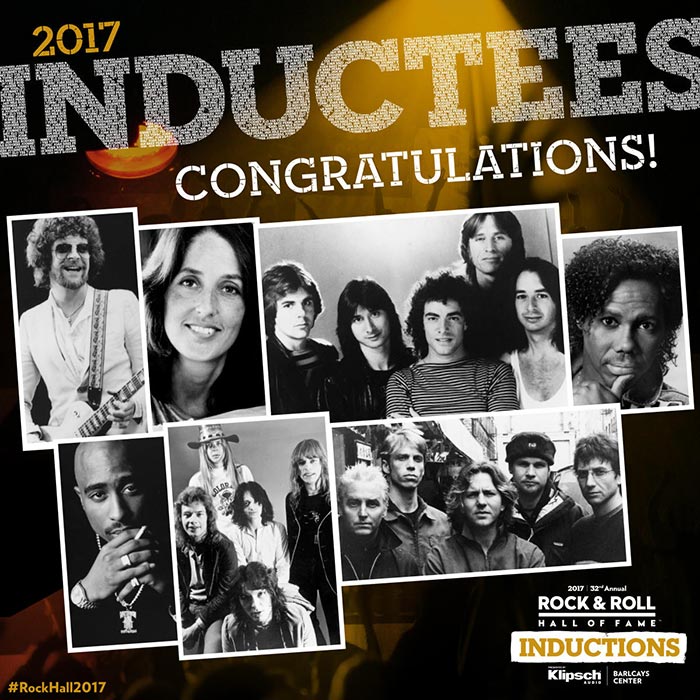 The Rock & Roll Hall of Fame is proud to announce that 6 artists from the ballot are included in the Performer Category and 1 individual is recognized with an Award for Musical Excellence.

YOUR CLASS OF 2017 INDUCTEES ARE:
Performer Category:

The 32nd Annual Rock & Roll Hall of Fame Induction Ceremony, presented by Klipsch Audio, will take place on Friday, April 7, 2017 at Barclays Center in Brooklyn, New York for the third time. Ticket on-sale dates will be announced in January. The Rock & Roll Hall of Fame 2017 Induction Ceremony will again have its television premiere on HBO, and a radio broadcast on SiriusXM. Broadcast details will be announced in early 2017.

CONGRATULATIONS TO OUR NEW INDUCTION CLASS.
Klipsch Audio, a leading global speaker and headphone manufacturer, is a strategic partner and presenting sponsor of the Rock & Roll Hall of Fame, its Induction Ceremony events and the Rock & Roll Hall of Fame’s Main Stage. Klipsch’s renowned products deliver the power, detail and emotion of the live music experience throughout the iconic museum.