Sam Smith’s “Stay with Me” is Tom Petty’s?

The Consequence of Sound is reporting a settlement in the controversy of songwriting credits for Sam Smith’s “Stay With Me.”  When Sam Smith’s “Stay With Me” was released in April 2014, it seems some listeners thought the song bore a resemblance to Tom Petty and the Heartbreakers’ 1989 classic “I Won’t Back Down”. It seems like Petty’s reps (and lawyers) also took notice, and the soft spoken British singer has since agreed to share some songwriting royalties.  This isn’t the first time that songwriters have had disagreements over songwriting royalties. There’s the infamous George Harrison’s “My Sweet Lord” and the “He’s so fine”, by Ronnie Mack, and performed by the Chiffons. Despite Phil Specter’s “Wall of Sound”, Mack won the suit. Lesser known and more easily recognizable with the Beach Boys’ “Surfin’ USA”, which is so much like Chuck Berry’s “Sweet Little Sixteen” that nearly anyone can  hear that it’s nearly the same song.

In this dispute of Sam Smith and Tom Petty, according to The Sun, both singers settled out of court back in late last fall, but some of the details only leaked out over the last weekend. This amicable settlement reportedly included a 12.5% writing credit to both Petty and singer-composer Jeff Lynne (from the Electric Light Orchestra). Yahoo Music reports the song has sold over 4 million copies so far.  The song’s credit on ASCAP — that’s the American Society of Composers, Authors, and Publishers — now lists Smith, Petty, Lynne, and Jimmy Napes as the chief songwriters. (see chart).  To listen for yourself, we’ve included links to both songs, below: 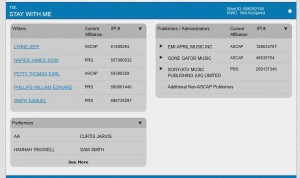