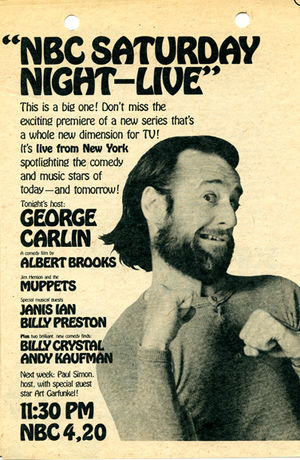 The influential comedian George Carlin hosted the first episode of SNL and set the tone for years to come. Carlin wanted to wear a t-shirt, but the network wanted him to wear a suit. As a compromise, Carlin wore a vest and jacket over his t-shirt, and hosted the show while reportedly stoned out of his mind. He starts the show with this:

“It’s already Sunday, and it’s God’s day OFF!! That’s what it said in the Bible – He worked six days, then He took Sunday off. It’s His one day off, and THAT’S the day we all go in and crowd the church and ask him: [ mumbles praying sounds ] “It’s my day off, man!”

Well, we create God in our own image and likeness. No question about that. Every time I see a picture of God, I mean, He has knees and toenails, right? Uh – and a good example – a betterexample – of our kind of self-centeredness, when it comes to God – when we put a statue of Jesus on the dashboard, instead of having Him looking out and watching for traffic, which is what He should be doing, we have Him watching us drive. [ mimes operating a steering wheel with frenzy ] “Heeeeyyy!! Watch THIS, Jesus! Left turn!” You ever see a statue leap? Jumped right up into the baby shoes that time. Don’t worry, don’t worry – the universe is in balance, because Jesus has a statue of a middle-class American hypocrite on His dashboard. It’s alright. Things work out well.”

Virtuoso keyboardist, Billy Preston, the only musician to be credited on a Beatles recording other than the group’s four members, and Janis Ian shared the musical guest spot. Singer-songwriter, Janis Ian sings her hit, “At Seventeen” in a white, polyester suit that would make Barry Gibb proud. She burst onto the music scene at age 15, only to disappear from the charts for nearly a decade.

Andy Kaufman displays his simple, comedic brilliance as the special guest. He enters the frame appearing nervous, but then calmly turns on a recording of the “Mighty Mouse” theme song and lip-syncs a single key lyric. The live audience loves it and you can feel the star power of Kaufman rise in those few moments.

Saturday Night Live went on to become the longest-running, highest-rated show on late-night television. The 90-minute program, broadcasting live from Studio 8H in the GE Building at Rockefeller Center, includes a different guest host and musical act each week. The opening sketch of each show ends with one actor saying, “Live from New York, it’s Saturday Night!”