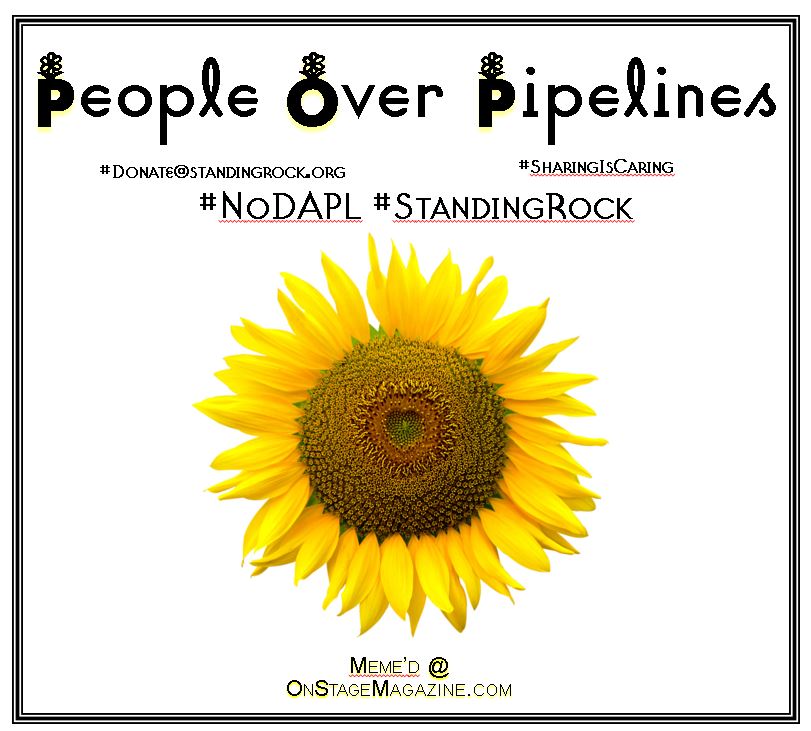 The Sioux Tribe’s position on the Dakota Pipeline is that an old-fashioned American land grab transpired. When built, the pipeline will stretch more than 1,100 miles from oil fields in North Dakota to a river port in Illinois. The tribe has a valid fear that the pipeline threatens their sole water source and, more significantly, they were not consulted before the pipeline was approved on sovereign land.  The trial to halt construction on the pipeline has been trudging forward in U.S. federal court since July, with the judge weighing the tribe’s claims against those of the defendant, the Army Corps of Engineers.

Hundreds of  Native people and Sioux Tribe Members have been protesting the construction of the Dakota Access pipeline since April and this month, people from all walks of life joined the standoff at Standing Rock.  The videos scrolling through our social  feeds with impassioned pleas and images more reminiscent of a nazi movie are hard to ignore. The cruel and unusual treatment the DAPL protesters are enduring was difficult to comprehend before ‘Live Streaming” became a “thing”so, we’re following Jackson Browne’s lead and giving the Sioux the benefit of our time. The situation seems to be going from bad to worse, and it’s past time to reevaluate the Dakota Pipeline and stop the madness. 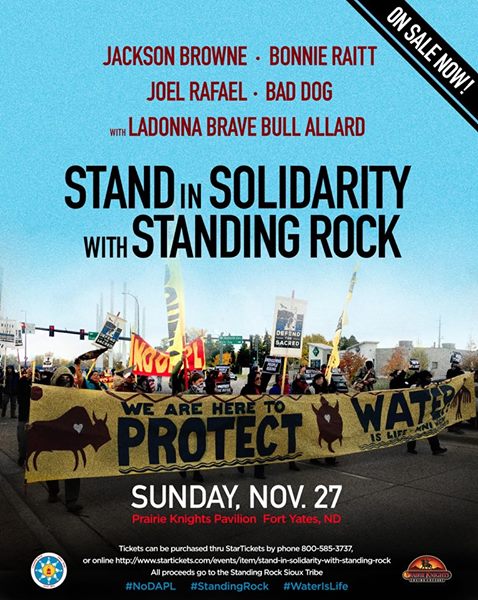 Standing Rock community and Water Protectors: Iconic musicians Jackson Browne and Bonnie Raitt, along with performers Joel Rafael, and the late John Trudell’s band, Bad Dog, will perform a benefit concert on Sunday, November 27 for the Water Protectors on the front line at Standing Rock. Storyteller Ladonna Brave Bull Allard, founder of the Standing Rock Sioux Camp at Sacred Stone, will speak at the concert. Other performers will be announced as they are confirmed.

UPDATED: The concert is free for the Standing Rock community and Water Protectors.  All gross proceeds from the concert public ticket sales will benefit the Standing Rock Sioux Tribe in their efforts to halt the Dakota Access Pipeline and prepare the camps for winter.

The concert will be on Sunday, November 27, 2016 at 6:30 pm at the Prairie Knights Pavilion in Fort Yates, ND, which is seven miles from the Oceti Sakowin Camp. Tickets went on sale to the general public on Saturday November 5th at 10 am central; The link to purchase tickets is HERE  or by phone at 800-585-3737.

“Just as we give thanks for our good fortune and the bounty of our lives as Americans, let us thank the Native people who are gathered here at Standing Rock to protect the natural world and defend our place in it,” said Jackson Browne in a statement.

“I’m proud to be standing in support of the courageous and dedicated Water Protectors at Standing Rock. This movement is growing by the day with solidarity actions happening around the country, yet the media isn’t covering it nearly enough. Our hope is that this concert will help bring more awareness and media attention to the issues being raised at Standing Rock, and to put pressure on The Obama Administration to halt construction of the Dakota Access Pipeline until protection of sacred sites is ensured,” said Raitt.

Raitt and Browne have long been supporters of Indian country, as well as the Oceti Sakowin Camp, “a historic gathering of Native nations, friends and allies, from all walks of life standing in solidarity to halt the Dakota Access Pipeline.”