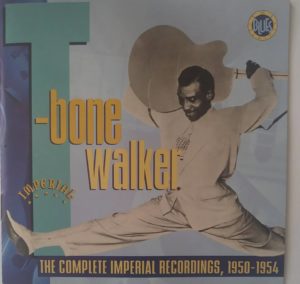 The late B.B. King cited him as the musician who inspired him to learn to play guitar. Historically, along with jazz great Charlie Christian, he is one of the very earliest electric guitar masters and showmen. A famous photograph shows him playing the guitar behind his head while on the floor doing a split. As a writer, he authored one of the best-known blues standards, Stormy Monday. Considered the “father of modern blues,” his name was Aaron Thibioux Walker, but he is known as T-Bone Walker.

Born in 1910 in Linden, Texas, T-Bone Walker moved with his family to Dallas at an early age. His stepfather and mother were musicians, therefore he learned to play guitar, ukulele, banjo, violin, mandolin, and piano. Walker’s mother reportedly called him T-Bow, a nickname that evolved into T-Bone.

The famous bluesman Blind Lemon Jefferson was a friend of T-Bone’s family. Jefferson enlisted the young musician to guide him in his travels and became a mentor. By the age of 15, Walker was a professional musician. He moved to Los Angeles in 1934 and soon thereafter began playing electric guitar.

The many songs written and performed by T-Bone Walker include some of the best Texas blues, West Coast blues and Jump blues. Jump blues is a style originating at the end of the Swing era of jazz and preceding rhythm & blues and rock and roll. Louis Jordan was one of the stars of Jump blues.

Because he skillfully played jazz as well as blues, T-Bone performed with some of the top big bands. He appeared with the renowned Jazz at the Philharmonic along with jazz greats like the legendary Dizzy Gillespie, seen here with his upturned trumpet.

Two of the best and most popular renditions of Stormy Monday are those of Bobby Blue Bland;

and the Allman Brothers Band. The Allmans’ version, from their Live at the Fillmore East, is very much based on Bland’s.

Walker continued performing into the 1970s and passed away in 1975. He is a member of the Blues Hall of Fame (1980), and the Rock and Roll Hall of Fame (1987). One could name the numerous blues and rock guitar greats influenced by T-Bone Walker. However, it is not an exaggeration to simply call him a trailblazer and influence upon most of the great electric guitar players after him.