The Easthills – Fear and Temptation Review 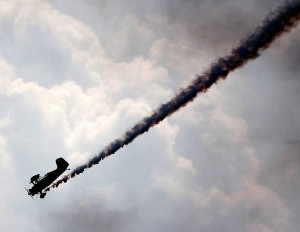 Just over one month ago, we had the joy of sharing with readers the third and final single from the album Fear and Temptation by Indiana based rock act The Easthills. If you’re an avid OnStage reader, you may already be familiar with their name, since we’ve covered most of their major releases and live appearances since the band first exploded on to the scene nearly three years ago. Considering our history with the Easthills, it shouldn’t be surprising that we’re thrilled to announce the arrival of their second full-length album. Our verdict? It absolutely, bone-crushingly rocks.

Fear and Temptation presents a logical and exciting step forward for the five-piece rock outfit. Back in 2013, their debut album Death of a Salesman established the heavy, yet catchy sound that continues to define the Easthills. Think big guitars, bigger vocals, and enormous choruses. A year later , the band followed this killer debut with a short EP titled World Class Prick, which proved their ability to experiment with their sound without losing direction. The new album, Fear and Temptation, continues in the direction of World Class Prick by combining new sounds and writing tactics with the classic Easthills formula first established with their debut.

So what can long-time Easthills fans expect from this new release? We’ll give you a track-by-track breakdown in a minute, but in short, the answer is more — more guitars, more synthesizers, more guest musicians, and more emotional lyrics. As the band’s musical and compositional skills improve, it’s impressive to see them take such a measured step forward in their careers. Fear and Temptation represents a clear attempt by the band to push their sound in a new direction, while still remaining true to their roots. 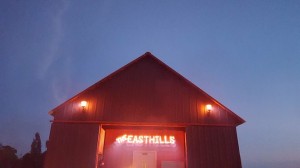 This new, improved direction is evident even on the first song of the album, “Nothing Exceptional.” This tune starts off in true Easthills style with a huge, heavy guitar riff, but the track also takes the opportunity to show off the band’s matured writing abilities. The subtle changes to the vocals during the chorus, the moving guitar fills at the end of sections, and the increased use of background harmonies immediately sets a precedent for the quality of writing you can expect from the rest of the album. This track, as well as five others on Fear and Temptation, features Doug Gillard of Nada Surf and Guided by Voices. Gillard’s influence on these tracks is evident, and fortunately, his personal style meshes quite well with the Easthills’ core sound. The result of this mixture is a solid opening track that immediately hooks listeners and builds excitement about the rest of the album.

“Face It” is the second track, and it’s most notable for its very tight and satisfying drum work. Throughout the song, drummer Wade Parish manages to bang out a series of rolling, yet precise drum lines that lends the track a strong sense of forward motion. The lyrical content of “Face It” is also worth mentioning, as it’s the first of many times during Fear and Temptation that the Easthills dive headfirst into some challenging content.

Do you know that fun, sideways head bob dance move that everyone does whenever they’re listening to a song that just flat out rocks? You know the one – it’s a lot like the classic head bang, but with more sideways motion. Fear and Temptation’s third track, “Mothers & Fools”, is just the track to bust out that quirky dance move. The guitar tone is somehow both heavy and bouncy at the same time, which is not a tonal quality that’s easy to achieve. Furthermore, “Mothers & Fools” features some really impressive vocal sections. The Easthills have always utilized two vocalists, Hank Campbell and Will Barada, to distinguish themselves from similar acts, and “Mothers & Fools” is a stellar example of just why that formula works so well.

There’s not much to say about the album’s fourth song, “Snake in My Gut (Caroline’s Heart)”, except that it harkens back to the days of Death of a Salesman. While old Easthills fans will rejoice, newer fans can still appreciate this track, as it’s well written and has a lot of nice change-ups sprinkled throughout the tune. All in all, another solid song for Fear and Temptation. 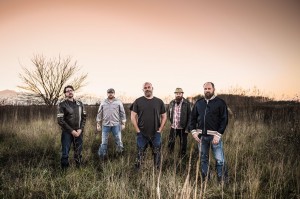 “Holiday Women” is a prime example of the Easthills’ increased use of the entire dynamic range. The track features both acoustic and electric instruments, and fits them into a much more traditional blues framework than most of the album’s other songs. This track features both Frank Hannon of the band Tesla, and Neal Doughty, the sole remaining founder of iconic rock act REO Speedwagon. It’s evident that the Easthills attempted to meld their style with those of these two phenomenal guest rockers, and the result actually turned out very nicely. “Holiday Women” is an obvious standout track, and more than likely will go down as a fan favorite. 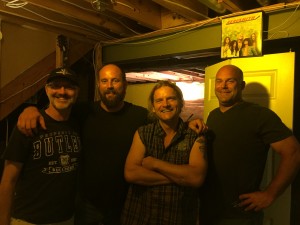 We’ve already mentioned the Easthills’ increased use of dynamic range and new writing tactics, and while we don’t want to beat a dead horse, this point is extremely evident on the tune “Here Without Me.”  This song is quite slow compared to most Easthills tunes, and it features some really interesting lyrical content (as well as a very tasteful guitar solo). While this tune probably won’t be most fans’ favorite from this album, it helps a lot with the pacing of Fear and Temptation, which makes it a successful tune in our book.

When we reviewed Death of a Salesman, we discussed how the song “Hard to Feel” reminded us of “the Beatles mixed with just a dash of Motley Crue and Snow Patrol.” Although you can axe the Snow Patrol and Motley Crue comparisons this time around, “Safe Tonight” from Fear and Temptation reminds us once again of the Beatles. If we had to guess, the processed vocals, minor chords and harmonic inversions are the source of this association. Regardless, “Safe Tonight” is a masterfully written track on both the lyrical and musical fronts. Around the three-minute mark, the band launches into a truly beautiful instrumental section, which immediately distinguishes “Safe Tonight” from every other Easthills release. The song also utilizes a ¾ time signature, which is rare for the Easthills. 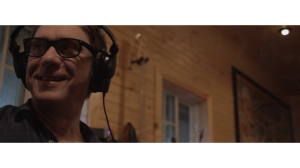 The album’s eighth song, “Remember the Kids”, uniquely begins with a filtered piano sound. While the Easthills don’t often use an acoustic piano sound, the filtering effect is similar to that used on their guitar tone on many of the other tracks on Fear and Temptation. This gives “Remember the Kids” a license to be different, yet also thematically linked, from the rest of the album. Outside of the interesting piano tone, “Remember the Kids” is a pretty straightforward Easthills song, though the chorus is quite memorable. Don’t be surprised if you’re humming this one to yourself for hours after listening.

While we’re not supposed to let personal taste dictate our reviews, it’s worth mentioning that Fear and Temptation’s ninth track, “Georgia Pines”, is easily our favorite on the album, and not just because this writer is based in Georgia. From the opening bass line to the stylishly palm muted guitar behind the verses, this song is engineered to make you dance. The vocals are great, and the instruments are even better; this song just rocks, plain and simple. We’d imagine it’d be a lot of fun to see live. 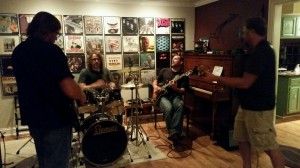 The tenth song, “Fiction Jazz”, should appeal to fans of grunge rock. The crunchy guitar tone, soaring yet gravelly vocals, and liberal use of the phaser effect makes it difficult not to draw comparisons to acts like Soundgarden or Audioslave. Unfortunately, the ending of this otherwise decent track is a bit odd. It uses the classic fadeout method, but the fade happens over an extremely long time (literally the entire last quarter of the track). Most of the fade occurs during what feels like the climax of the song, however because the volume is constantly being lowered, the impact of this section is dramatically reduced. Overall, however, “Fiction Jazz” is a well-written and fun song that may appeal to a new type of fan.

While the riff is different, it’s hard not to think of “Smoke on the Water” when listening to the opening of the eleventh track on Fear and Temptation, “A Lonely One”. Sure, the song immediately moves in a much different direction than the Deep Purple classic, but that stately riff right at the beginning is very similar. By the time you’ve hit the chorus, however, “A Lonely One” is firmly back in Easthills’ territory. This track is one of the best-written tunes on the album from a pacing perspective. We particularly enjoyed the slow rise in pitch in the vocals in last line of the pre-chorus; it really builds the momentum leading into the downbeat of the chorus. 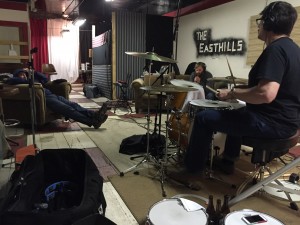 Earlier in this review, we mentioned that Fear and Temptation uses a lot more synthesizers than previous Easthills’ releases. You can hear them in the background in a handful of the previous tracks, but the synths really step into the spotlight on the closing track “Red Sweet”. By all measures, this song is very different than the rest of the album, though it does seem to fit the theme. The acoustic guitar tone used in “Red Sweet” is very pleasing to ear, in a way that’s vaguely reminiscent of the tone used in Chris Bell’s 1992 record I Am the Cosmos. From the beginning of “Red Sweet”, the track is obviously building up to something big, which first happens around the two and a half minutes into the song. “Red Sweet” continues to grow and grow from there, leaving the listener wanting more as both the track and the album simultaneously come to a conclusion.

While this isn’t a perfect record, there are a great number of things the Easthills did phenomenally well in Fear and Temptation. If this is the type of matured sound the band plans on pursuing with future releases, you can safely bet that the Easthills will only continue to grow in popularity. As always, we’ll keep you updated on anything new coming from the Easthills, but in the meantime, please enjoy Fear and Temptation.