With their second album Albatross, set to drop on November 7th, Thirsty works the same formula as their debut album. Intense lyrical imagery, and layers of sound formed by smoking guitar work. And, they use just enough time to fit them in.

The band, a solid collaboration between Guy Bailey (Quireboys) and Russian poet Irina D. delivers unique subject matter and skillfully matched musicianship while containing it in a  3-minute song. The short-and-to-the-point format works well. Literary references to characters from the classics and highbrow authors are probably a little too deep for the casual listener, so instead focus on the full experience. That experience satisfies enough, no matter how complex your thirst might be. 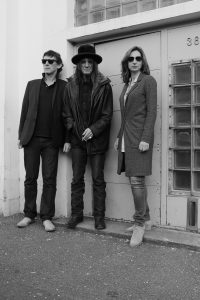 The title song, “The Albatross” opens with a big sound, familiar and comfortable. Enter Guy Bailey’s vocals which can whiplash you with their Tom Waits-Brian Johnson gravel. The man sounds, well, Thirsty. And maybe a little scary, until he sings and reassures us “It’s alright, He loves us all.” Below the vocals the bass meanders away from a blistering guitar, and you think, maybe another minute or two would be nice. But 3:38 is all you get before it turns to “Chaos.”

“Chaos” starts out simple enough with a slight Lou Reed feel to the vocal intro. Slow paced and an easy ride at first, then Bailey lets his guitar do the heavy lifting, while pulling in a bit of fine keyboard playing by former Quireboy Chris Johnstone.

“Beat Of Her Heart” lies somewhere at the intersection of Dylan and Petty. Soulful and introspective, the ballad has a fluidity that carries you through.

Moving more toward Bowie, “Parliament Of Fools” has a lot going on throughout. Infectious backing vocals, chopsticks-like piano, and scratchy sing-song vocals all blend together in a constructed chaos. It still has a light feel to it and is a lot of fun.

“Cosmic Aphrodite” departs from the rest of the album with a shared vocal between Bailey and Irina D., with the female vocal taking the lead. It’s a little Velvet Underground, a little Ian Dury, a little weird.

The album ends with “Patriotic Little Trash.” With its soaring background vocals that have a Pink Floyd feel, Albatross takes its wall of sound and fades away.

Albatross as a whole

From start to finish, Albatross works at a high level. Try to follow the lyrics and you will fail miserably. It’s not easy to get into the mind of a poet who writes the next chapter in lives of unfamiliar literary characters. And between the production, which places more emphasis on the instruments, and the nature of Guy Bailey’s voice, the lyrics are not easy to follow. Taken as a package though, and the album delivers. With the shortness of each song’s length, Thirsty packs a punch in each three minute tune. The constraints of that time structure requires a specific discipline. To consistently create music of quality to fit into that discipline require talent.

And maybe a stopwatch.