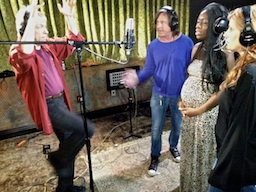 It doesn’t take much to make background vocals sound a lot bigger that just doing a double. Here’s a couple of tricks from The Music Producer’s Handbook to give those BGs the big sound they deserve.

“An offshoot to doubling is vocal stacking, a technique normally used on harmony background vocals. Like doubling, stacking can make a harmony vocal part sound stronger while smoothing out any tuning inconsistencies.
An example of vocal stacking would be a three piece vocal group singing a three part harmony part. After their first pass is complete, they’d double the exact parts singing it exactly the same way, then even triple track it or more, all in an effort to get a bigger fuller sound. One little trick that makes a stack sound bigger is to have the vocalists take a step back from the mic with every vocal pass while the engineer increases the mic gain to compensate for the distance. The increased ambience of the room will naturally enhance the sound without artificial means.
Another trick would be to have the vocalists change parts with every pass. In other words, the vocalist on the highest part of the 3 part harmony would move to the lowest, the one on the mid part would move to the highest, and the low part would move to the mid part. Of course, this assumes that the vocalists are pros and capable of changing vocal parts without too much of a problem, and that their voices are actually capable of performing the new parts.”