A New Year With Classic U2 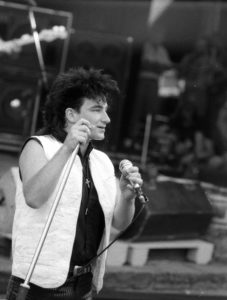 U2 released “New Year’s Day” at the beginning of January 1983. This song is the lead single from the album “War. It ranks in as U2’s first UK Top 10 and their first single to chart in America. “New Year’s Day” lifted U2 from the fringes of college rock to the mainstream.

The lyrics refer to the movement for solidarity lead by Lech Walesa in Poland. Lech Walesa is a Polish politician and labor activist. He co-founded and headed Solidarity, the Soviet bloc’s first independent trade union. He won the Nobel Peace Prize in 1983, and served as President of Poland from 1990 to 1995. After U2 recorded New Years Day, Poland announced they would abolish martial law, coincidentally, on New Year’s Day, 1983. The themes of understanding in a time of global unrest were a focal point for this album, whose title was inspired by the global conflicts of 1982.

Bono told Rolling Stone that he made up its lyrics, as he often did, on the spot. “We improvise, and the things that came out, I let them come out,” he said. “I must have been thinking about Lech Walesa being interned. Then, when we’d recorded the song, they announced that martial law would be lifted in Poland on New Year’s Day. Incredible.”

Regardless of the political meaning, this song feels like a love song and Bono considers it one. He’s said that while it is about war, it deals with “The struggle for love.” The haunting melodies, the promise of a return…so poignantly bittersweet. It’s easy to imagine lovers who share an enduring bond, one that cannot be broken by time, distance, or even death. “I will be here again.” So beautiful, and one of the most enduring songs of all time.