Win Tickets To Every Show! Roger Clyne and the Peacemakers

Win a pair of tickets to every show on this tour, and get a free CD.

You could even get it autographed.

5 Runners up will receive an autographed DVD.  No purchase Necessary, enter below: 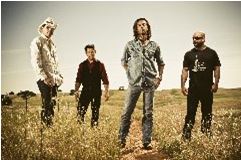 Arizona-based Roger Clyne & The Peacemakers are on the road again, weaving around the country to deliver the musical goods, and we’d like you to enter to win two tickets to see them LIVE !

Roger Clyne & The Peacemakers have released six consecutive albums that have debuted in the top 10 on Billboard’s Internet Sales chart, the first independent band to ever accomplish that feat. Two of those albums, 1999’s Honky Tonk Union and 2004’s ¡Americano!, debuted at #1. That streak of creating timeless rock music continues with RCPM’s most recent studio album, Unida Cantina. Not too many bands curate their own music festivals, but Roger Clyne & The Peacemakers have done so twenty times.  Every June, the band packs ponchos and sandals and heads down to Puerto Peñasco, Mexico to celebrate life through rock-n-roll with their biggest beachfront festival weekend of the year.  Peacemakers of all ages, and from 32 States and 7 countries have attended what some call it RCPM’s “annual convention.”  In addition to Circus and their headline shows, RCPM have opened for Dierks Bentley, John Fogerty, Willie Nelson, Barenaked Ladies, Live, Blues Traveler, Sammy Hagar and Kid Rock, among others.

“The music they play is impure, dirty, raw, immediate and larger than life; yet it comes squarely   from its center; it’s timeless…”  – All Music Guide

“…the Bruce Springsteen of the Southwest.”  – Asbury Park Press

Clyne enjoyed an accomplished stint with The Refreshments, a late-90s rock band whose cult-classic album Fizzy, Fuzzy, Big & Buzzy produced the hit singles Banditos and Down Together. Clyne also wrote and performed the theme song for FOX’s animated hit, “King of The Hill.”  Enter below for your chance to win, NOW !