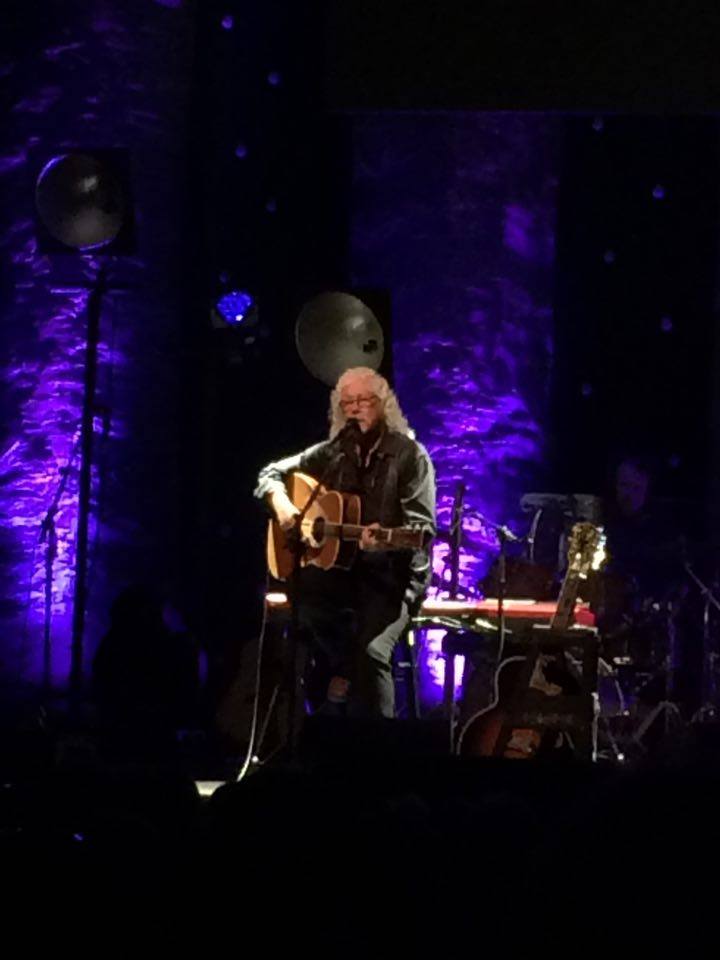 Having reviewed Arlo Guthrie a couple of times in the past, the plan was to enjoy last night’s show at the Newton Theatre in northwest New Jersey, as a civilian. Well, a long time ago John Steinbeck reminded us of the futility of best laid plans. So instead of a review, in honor of a wonderful storyteller of my generation, I’ll attempt to tell you the story of the 50th Anniversary of Alice’s Restaurant Tour. Or as was described in an online post, “Celebrating 50 Years of Garbage.” 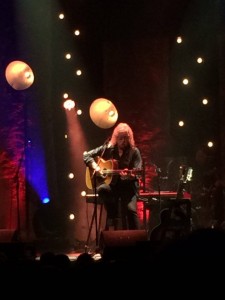 I’ll skip the actual story of Alice’s Restaurant assuming anyone interested in reading this post has a memory or two about it. Instead I’ll start with the art of storytelling.

To be honest, I’m not a story teller. I’m more of an observer who writes or rants about what I see. Storytelling in itself, especially oral storytelling, is merging facts and fiction, words and phrases, cadence of voice, and of course, a story. The Guthrie family has generations of stories with a cast of characters whose own stories are legendary.

Every time I see Arlo, the joy that fills me has always been tempered with the reality of life. Our time on this earth is limited and eventually all storytellers are silenced. Last night as Arlo’s daughter, Sarah Lee Guthrie opened the show, it was heartwarming to realize the Guthrie family narrative is safe for at least one more generation. Inheriting her father’s gift of words, Sarah Lee brought her own memories of growing up Guthrie. And while Lead Belly was not part of her remembrances, Ramblin’ Jack Elliot is still one of those unforgettable characters who played a part in her life. Sarah Lee is delightful, witnessing the endless possibilities of life while accepting its realities. Seeing the Guthrie legacy secured for the foreseeable future is more than comforting.

As the minstrel that he is, Arlo Guthrie usually has a no frills type of set-up. A backup band comprised of friends and his son Abe accompanies Arlo as he switches between guitar and piano. For this 50th Anniversary tour however, a multimedia show was included, offering an even more personal view of the Guthrie saga. This tour is nearing its end after a year and a half on the road. no doubt exhausting, but tolerable with being surrounded by family and friends.

The opening set was filled with favorites from Arlo’s catalog, songs of his father, and songs of his father’s friends. For along with the stories, the music of those friends is equally important. History taught in school could never be as entertaining, and we can only wish its value would be taught alongside the never-ending stories of war and carnage. 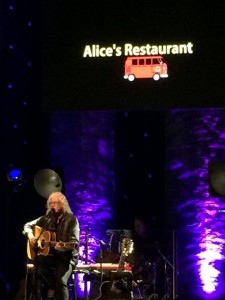 After a short break, the reason for the night’s celebration came around on the guitar. A legacy that is both a blessing and a curse, Alice’s Restaurant began as a whimsical statement on friendship, bureaucracy, and the Vietnam War. It is now an anthem of baby-boomers, a stop-where-you-are-at-noon-on-Thanksgiving-and-find-it-on-the-radio tradition. As Arlo sang, clips of the long-lost Alice’s Restaurant movie played, and the audience never stopped smiling. I’ve been to countless shows over the years, but singing the chorus of Alice’s Restaurant along with Arlo was one of the coolest experiences I’ve ever had in a music hall.

The show continued with more musical memories including Woody’s “This Land Is Your Land,” in itself a history lesson of this country, one whose narrative message has never been more timely.

Being able to keep telling the story of a storyteller is an honor I never fail to recognize. Being witness to the storytelling is a treasure of its own. 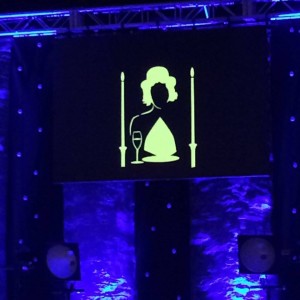