Darlene Love on Her Career, the Joy of Singing, Valentine’s Day Shows 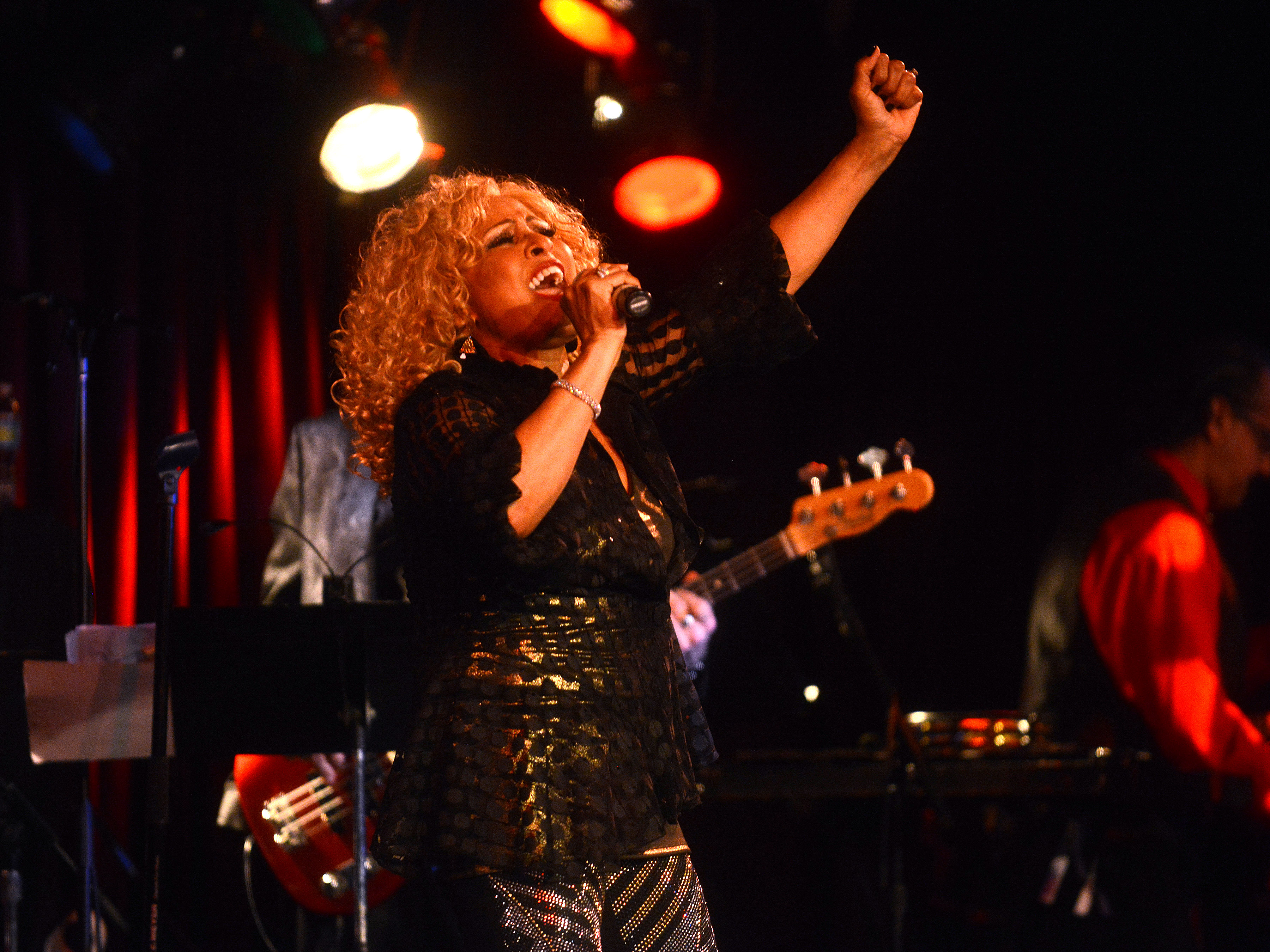 ‘See the way he walks down the street

Watch the way he shuffles his feet

My, he holds his head up high

When he goes walking by, he’s my guy’

The powerhouse vocal on “He’s A Rebel” released in 1962 by The Crystals was beyond memorable. It was the song that made the voice of Darlene Love instantly recognizable from that point on. The only problem was that Darlene Love was not one of The Crystals and it would take decades before she would be recognized as the singer of that song and many others.

The wait would be worthwhile. Darlene Love eventually won a court case against legendary record producer Phil Spector for past due royalties. She has been recognized by her peers as an integral part of the music business when in 2011 she was inducted into the Rock and Roll Hall of Fame, and was a integral member of the 2014 Academy Award winning documentary, 20 Feet from Stardom.

At age 75, Darlene Love is still at the top of her game. She is selling out shows and performing with the same joy and energy as she has for the past fifty years. The month of February is the month of Love and each year Darlene celebrates in the best way she can; she tweaks her performances to bring as much Love as she can…on and off the stage. This February 11th, Darlene Love will be returning to the Bergen Performing Arts Center in Englewood NJ and performing her Valentine’s Day show.

We talked with Darlene Love about her long career and her return to New Jersey. She told us that Bergen PAC “is becoming my home for Valentine’s Day. This will be the third year. It’s amazing. The same fans come back, but the great thing about it is they go home telling everybody how they missed it, so that next year they bring other people with them. And those people that come with them, they bring people the next year. It’s always a great thing to be able to go to a Valentine’s Day show where it’s all about love. It’s about the audience and them loving one another and me loving them. It is a relationship that I try to bring to them that I have for my audience. So they really enjoy it, plus since they only get to do it once a year, they never get tired of it. And there’s really no age thing. It can start at fifteen or ten because they bring their children. And now the children are bringing their children. It’s really a lovefest.”

Before we talked about her stage show and upcoming Valentine’s appearance at Bergen PAC, we discussed her remarkable career in show business, ”I’ve been really blessed, because even though you think you can’t make it, you always can. No matter what. I know that God has given each one of us a gift and we have to figure out what that gift is. And that’s what I’ve been able to do all my life, starting at the age of ten. The amazing thing about it is I never thought I’d be a professional singer.”

Well, she is so much more than a professional singer. Darlene Love is a national treasure.

Kath Galasso: Your professional path has been one of many highs and many lows. While your talent and determination has never been questioned, attaining the recognition you rightly deserved had been difficult, to say the least. So, which was the most satisfying? Your induction into the Rock and Roll Hall of Fame, being part of the Academy Award winning 20 Feet from Stardom documentary, or winning the Phil Spector lawsuit?

On the R&RHOF induction, what went through your mind when you received word that you were in?

The amazing part of it was how I found out. I was on my way to Atlantic City to do a gig, and I was sitting in the backseat with my husband in the limousine, and I got this phone call from one of the directors at the Rock and Roll Hall of Fame. He said “Well, welcome to the family.” And I said “Who is this?” And he said “You’re in, you’re in, you’re in this time!” I just started screaming at the top of my lungs and I said to myself, let me stop screaming before this limousine driver stops this car cause he thinks my husband is back here beating me. And I remember saying that to myself like it was yesterday. That feeling of someone calling you saying you have been inducted is like no other feeling in the world.

I’ve never seen you perform without your signature 1000-watt smile. After fifty+ years onstage, do you still get the same level of joy out of performing?

You know what, it is a joy to be able to do it. I’m in relatively good health and I’m always thankful for every day that comes. I never forget to say “Lord thank you for this day.” I never forget that this is a gift and that joy I always feel every time that I get on the stage. I’m never nervous, I get a little antsy sometimes getting ready to go on. But once I’m out there and the lights hit, the joy just springs forth.

And you know, it’s not just saying “ok, let’s get out there and let’s do a show,” you have to take care of yourself. When I’m not working I get up five days a week at 5 o’clock in the morning and go to a kickboxing class for an hour. It takes a lot to get ready and to stay ready. It’s like a prize fighter or a runner. I can’t let my guard down. The first time I went to sing at the White House when President Clinton had his last Christmas show, I got that call a month before. Had I not been ready or stayed ready, I would have been all out of whack. You can’t get ready and prepare for the White House in a month, you have to be in that moment all the time. You never know when that call will come for something huge for you to do. So I stay like a prize fighter, I stay in the moment, and happiness and joy are part of it. You have to keep that joy in you all the time.

Your autobiography, “My Name is Love,” begins with a look back to a point in your career, when you didn’t really have one. Background singing jobs were not what you wanted and a solo career had not gone as you had hoped. You were cleaning houses for the rich in LA. It was a stunning way to begin the tale of your life, it was also a reality check for the reader. Most things in life do not come easy. Talk a bit about dealing with this change in your life and how you were able to accept it with such grace and dignity.

Well, you know when I was telling you about that little joy? It’s there, but sometimes you bury it. You try not to get so far down though that you can’t get up. I just couldn’t find any work. I was on the road being a backup singer and I decided I wanted to have a solo career and I just couldn’t find any work. Nobody would hire me, because you have to make people believe that you can do what you say you can do.

At that time I really wasn’t singing anywhere except for in church, but I always knew that I could sing. I just had to find a way to do it. But you have to stay busy, you can’t sit at home and twiddle your fingers and think someone’s going to call. That’s never going to happen, never. You have to keep doing things, talking to people, talking on the phone to people, you have to keep that up. The magical part of how I came back to really singing was I was cleaning houses and it was during the holiday season and “Christmas (Baby Please Come Home” literally came on the radio. And I looked up and I went “Whoa, ok, I hear you. This is not what I’m supposed to do, is it?”

I actually found a job on a cruise ship. I didn’t even know they had entertainment on cruise ships, I just went for it. My first job was on a cruise ship and that kind of sparked, that life came back to me. The amazing thing about when I did the ship is that people knew who I was. That amazed me because I had been in this dark place for so long. “What are you doing singing on a cruise ship?” and I’d say “Child, I’m making a living!” I never felt bad about anything I had to do. When you’re busy, people see that. You don’t know who’s seeing you or who you’re talking to or who you’re performing for, and word gets around. That’s how the word got around that I was back singing again.

When we first recorded it I was a little leery of recording an original Christmas song because people didn’t do originals, they re-did the ones that had been out there for years. So for that one to take off, and here it is fifty years later, and it’s still a great Christmas song. It tells a lot about the song and the person that’s singing it. You have to look at it that way. You have people walk up to you and say “I hear your song in song in elevators, in grocery stores, in the post office.” So they hear for almost two months, these wonderful Christmas songs, which is great.

You’ll be coming back to New Jersey again, with an upcoming show at the Bergen Performing Arts Center. What can the audience expect for this Valentine’s Day?

There’s a couple of love songs in the show and we make it special. There are things for married couples, oldest married couple, the youngest married couple, the ones with the most children. The thing about it though, is their spouse has to be there at that show. That’s the only thing, they have to be together. We let them come up and we let them dance to “Today I Met The Boy I’m Gonna Marry.” With my Valentine’s Day show, you make it more of an intimate show.