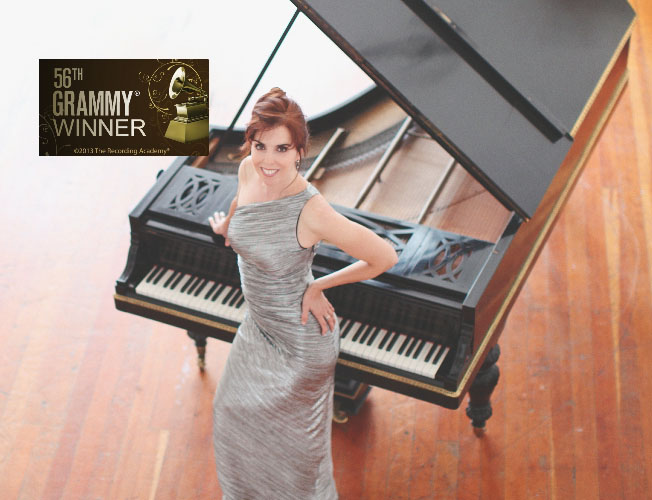 During her career, Laura Sullivan has composed musical soundtracks for movies, documentaries, TV shows, commercials, videos and more. Last year at the 56th Annual Grammy Awards, she was recognized for her efforts when her composition, Love’s River won for Best New Age Album.

Since that time, Laura has been in the process of creating a music video, although admittedly she had a lot of help. “900 Voices” is an epic adventure in seeing how one idea and one voice can spiral into a world-wide call to action, and the formation of a global community.

Basically, Laura invited the entire world to video themselves singing to her song “We Are Love.”  In a definite case of “be careful what you wish for because you just might get it,” more than 900 people responded in 27 different languages. After months and months of editing, “900 Voices” will premiere April 9th.

I recently had the chance to talk to Laura about “900 Voices” and what life is like after winning a Grammy.

Kath Galasso: Laura, the last time I saw you, there you were standing at the podium accepting your Grammy Award. What was your first thought as your name was announced?

Laura Sullivan: I was just so grateful of the support, and I could feel the support in the room. It was one of the most magical experiences ever. Fortunately my family was there with me and so I just felt so incredibly honored and grateful. And it has continued, that sensation, up until now, and I hope to keep it with me forever.

Tell me about the whirlwind of days and weeks after the Grammy win.

A lot of people calling to congratulate me, which was wonderful. It really did feel like a whirlwind and a blur and it still kind of does. Also a feeling of exhaustion, the whole experience of going to the Grammys, as you know, is so exciting. It’s really quite an experience, even if you’re not nominated. So I think it was just a feeling of “wow” in so many ways. 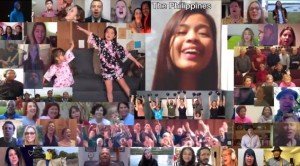 What’s the most significant thing that you think has happened because of your Grammy win?

I think it’s been my own sense that I want to give back and I want to, in some way, make winning a Grammy something that will help others. That’s what I’ve tried to do through my new project in this video, to collaborate on a large scale with a lot of people. And I’m also hoping this project will help Little Kids Rock, which is an organization that I really love and feel strongly about supporting.

How did you get involved with Little Kids Rock?

I have a friend, his name is Nate Anderson, and he used to have an organization called Ear Candy, which was similar to Little Kids Rock. He would take instruments and provide them to public schools where they didn’t have a music program. And his organization merged with Little Kids Rock. It’s something near and dear to me, having grown up in a public school where I had a music program that was fully funded. It really changed my life, and now I’m really excited to support kids in this way, when they would possibly not have the opportunity to learn music.

Your new project “900 Voices,” where did the idea for that come from?

It was somewhat also from winning a Grammy. But previous to that, a lot of people had asked me if they could put lyrics to my music, or if they could sing along with my music, which is mostly instrumental. So it occurred to me that I just really wanted to support that, and I wanted to get people involved because there were so many who wanted to be involved in the music. And I thought why not just allow everyone to be part, everyone who wanted to. So that was kind of the inspiration, and I just reached out and asked people around the world to be part of this project. It’s just been amazing and overwhelming, the response I’ve received, not only from artists and musicians, but from people who normally wouldn’t consider themselves to be artists. People from all walks of life who just decided to join in, even if it was just singing the word “love.” A lot of people sent me videos of themselves singing the single word “love.” It’s really magical to have all that participation that really comes from the heart.

It really was amazing how many people responded to you. Now was all of that done through social media?

It was done in a variety of ways. A lot of it was through social media, sending out messages and tweets and posting on Facebook. I also have a Youtube teaser of the project where I called out and asked people through the video to be part of this and I think it has 120,000 views right now. And a lot of people passed it on to others, then just word of mouth through my friends and my local community. Local people got involved and became sort of ambassadors that reached out. It was amazing, the enthusiasm people picked up for this, and that’s something I’m really grateful for. 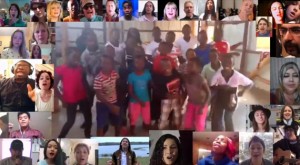 Was there anything that was really interesting or surprising about any of the videos?

Definitely yes. Lots of wonderful surprises. There was this choir in Uganda and these children were formerly homeless, and their whole story is fascinating to me. These kids used to be homeless, this guy put them together in a choir, and he sent me this beautiful video where they’re singing and they’re dancing, and it just looks like they’re the richest kids in the world. It is so happy, and they sing “We are love,” in their native language. When I saw their video, I just started to cry.

Then there’s a lady in Bulgaria, she was in the hospital, she gave birth to her baby and she sings in Bulgarian, “We are love, we are one.” And she’s taking a selfie on her cellphone while she’s doing this. She’s still in her hospital gown and holding her newborn baby, and it’s just amazing.

Is this part of an album coming out, or is it just being released as a single and video?

At this point it’s just the video and a single, and I managed to get twenty-seven languages into this one song. It was quite an editing effort, but I was just so moved by all that people sent me. I did my best to put it all in and I’m really excited to share it. When I watch it, I cry. It’s just so moving to me, and I hope that other people will enjoy it as much as I do.

Was it written specifically for this project or was did the idea for the project come together and this song was a good fit?

The project came first. I decided I wanted to do this and my husband and I are a team so I wrote several songs and he would listen to them. He’s my producer for a lot of my music, so he’d give me feedback and we kept molding it.

Now I just want to talk to you about this year’s winners of your category. Your friends Ricky Kej and Wouter Kellerman won the Best New Age Album Grammy for Winds of Samsara. How wonderful to be friends with the people who are following you in line.

Oh my goodness, I’m so excited for Ricky and Wouter, and excited for all the nominees. I really feel a sense of connection with all of the people nominated this year. I’m really proud of all of them. I think it’s a great time for New Age Music, I think it’s flourishing. I actually think that New Age Music is one of the few genres which is very sustainable because people always want to hear peaceful, relaxing music. I think it’s really exciting to see how people interpret that in different ways. The artists that were nominated this year are all really different. And for Ricky and Wouter, I’m extremely excited. I think their album is absolutely beautiful and very well deserving. They also have helped me on this current project, “900 Voices.” Ricky did some wonderful Eastern musical recordings that go into this, which people will hear.

I have an amazing PR team that’s helping me and it’s going to be ‘Share,Share,Share.’ All of the people who participated in this are really excited along with me. It’s kind of a community that we’ve developed in creating this project. We have a Facebook group and it’s just beautiful to see how people are sharing in this group. I’ve sent out certificates to all of the people who are going to be in the video, and people are posting their certificates and getting to know each other. I’m just excited for what future collaborations could come out between these people.

900 Voices, 27 languages, 1 video, and now a new global community. We can first watch the video, then wait and see how far the ripples of the project will go.