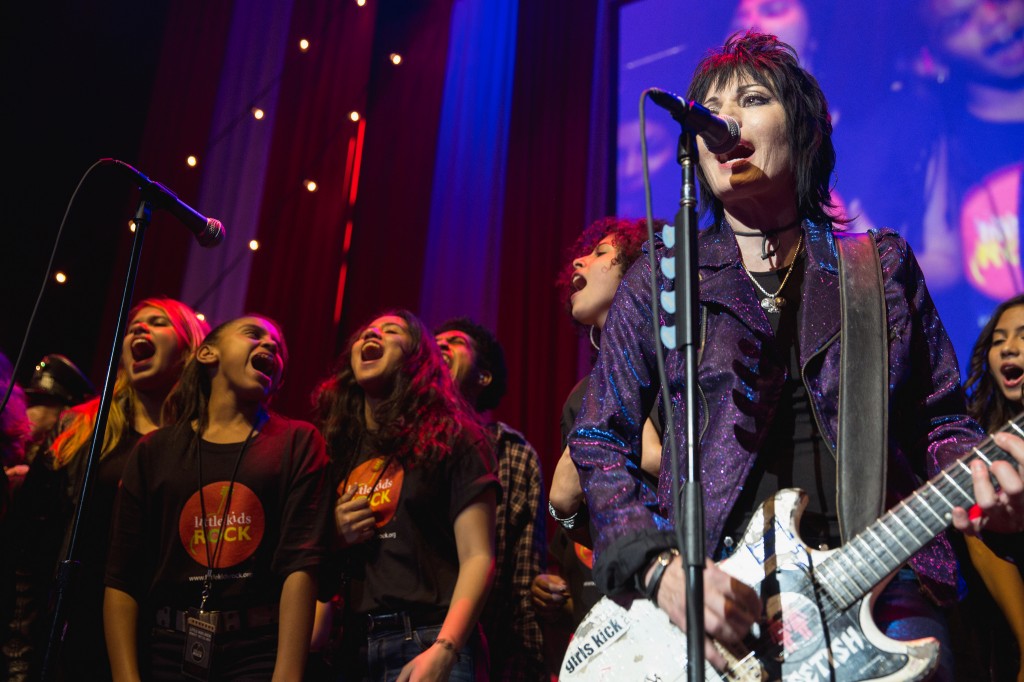 What would you do if you’re an elementary school teacher and you watch funding for music education decrease year after year? If you are David Wish, you basically say “I’m mad as hell and I’m not gonna take it anymore.”He initiated local after-school music classes, but soon realized the need was larger than his immediate area. At that point, he founded Little Kids Rock, a national not-for-profit organization which offers schoolchildren access to music classes and instruments at no cost. 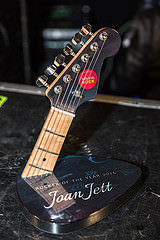 Each year the organization holds a fundraiser honoring a “Rocker of the Year,” and at the same time showcases some of the extremely talented kids who have benefited from the Little Kids Rock program. This year Joan Jett was honored for her work with the ‘Modern Band” program which teaches kids different musical styles.

Produced by Maureen and Steven Van Zandt, the event held at Manhattan’s Hammerstein Ballroom, featured a silent and not-so silent auction, speeches detailing the work of the organization, an impressive list of rockers who stopped by to sing a song from Jett’s extensive catalog, and a group of kids who sang from their hearts and blew away the room with their talent. And even though the pros all brought their “A” game, this night was about the kids. 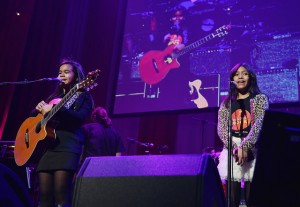 From an opening performance by Sharkpella, an after school a capella group for ages 13-16, to the two Ashley’s who performed an original song which also featured this year’s “Big Man of the Year,” Jake Clemons, it was obvious… these Little Kids Rock.

When it was time to pay homage to Joan Jett, Cheap Trick set the standard for the night as they kicked out “I Hate Myself For Loving You.” Each performance built on the one before. From Gary US Bonds, Brody Dalle (The Distillers), to Jesse Malin (D Generation) jumping off the stage and onto the tabletop of some very surprised dinner patrons as he threw out one hell of a cover of “Bad Reputation,” the performances did not disappoint.

Kathleen Hanna (Bikini Kill) spoke of her friendship and admiration for Joan Jett before she and husband Ad-Rock (Beastie Boys) covered “Fake Friends.” Performing Jett’s “Little Liar,” the vocals of Ms Darlene Love were beyond compare and one of the highlights of the evening. 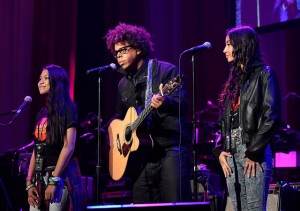 The evening soon got back to Jett’s strong suit as Mike Ness (Social Distortion) went back to fast and hard punk, performing “Love Is Pain.” Following Ness, Joan Jett made her appearance on the stage as she joined Tommy James (The Shondells) to sing his song she covered in 1982. Together onstage for the first time, “Crimson and Clover” never sounded better.

Jett stayed onstage as Billy Joe Armstrong (Green Day) offered his salute with “Don’t Abuse Me.”  The final guest of the evening was Alice Cooper, who joined her on his “Be My Lover.” As she stood on the stage being honored by one of her musical heroes, Jett talked about what a surreal moment it was.

The show’s finale brought back all the performers, as well as the organization’s youngest rockers for Jett’s anthem “I Love Rock And Roll.” The evening ended with hundreds of well-dressed patrons on their feet and rocking out to Joan Jett and company. Outstanding. 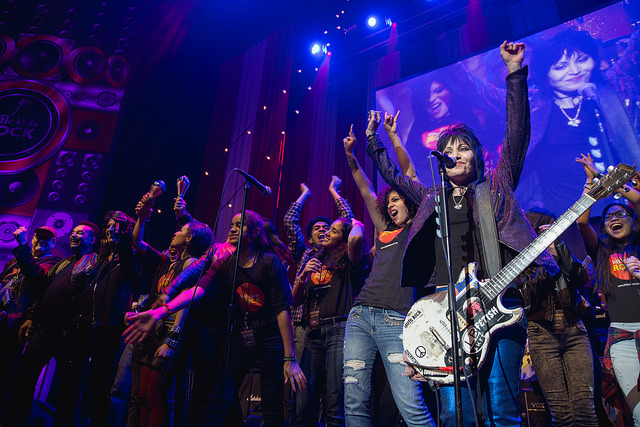 In this one night, Little Kids Rock raised over $1.5 million. In the twelve years of its existence, the organization has served more than 320,000 schoolchildren in over 1,000 schools.  In this short time, it has become the largest free instrumental music program in the country. It is a living, breathing program operating because of the commitment of sponsors, volunteers, teachers and donors. If you believe that music education is important, check out the Little Kids Rock Website for ways to help.