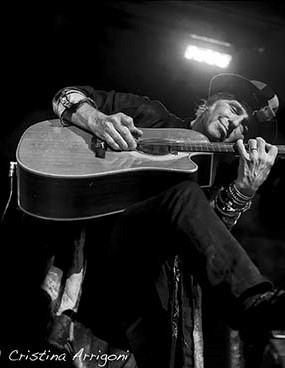 Monday night at City Winery in NYC, Nils Lofgren came to dance. He also came to play a whole lot of fine music.

Nils and the band (Kevin McCormick, bass; Andy Newmark, drums; Tom Lofgren, keys; Cindy Mizelle, backing vocals) are about halfway through their spring tour. The second night of the sold-out NYC run was everything you would expect from this level of musicians. It was also a lot of fun.

The night started with a steady beat from Andy Newmark, Kevin McCormick jumped in with some weight before Nils added the opening guitar notes of “Daddy Dream.” Nothing too fancy at the beginning, but the dazzle effect wouldn’t take too long. Some guitarists strain against their instrument to get every note. Lofgren’s style is more of giving a gentle push, a technique that is fascinating to watch.

This tour is in support of the new album Blue with Lou, which features six songs co-written in the 70s with the late Lou Reed. The night contained a nice mix of the new album as well as a few choice tidbits from his earlier catalog. The first of the Lofgren/Reed compositions played was “Give.” An up tempo song, listening to it on the album it’s one that you can imagine could be really blown out during a live performance. It was. Lots of room for the band to reach and the give-and-take between Nils and Cindy Mizelle was striking.

Next up, “Too Many Miles” slowed down the pace and brought out the blues. Back to the new album, after a little technical glitch where Nils poked fun at himself, was the beautifully touching ballad, “Too Blue To Play.” With soft and melancholy backing vocals, the song has the essence of sincerity and pain. “Don’t Let Your Guard Down,” another Reed/Lofgren tune, is a true rocker. Fast and catchy, it physically pulls you into the song.

“Tender Love” featured sweet harmonies between Cindy and Nils while he let his guitar play a song of its own. 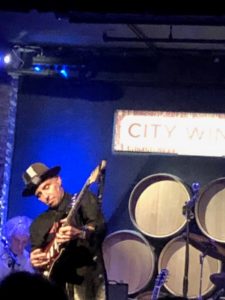 Lofgren spent a few minutes talking to the room and looking back at fifty years of being on the road. Some of those memories include 35 years as a member of the E Street Band, his early days with Grin, and the work he’s done with Neil Young. There’s a story of how a part of Young’s “Southern Man” was derived from a polka beat on an accordion, but he’s a better storyteller so get to a show and hear it from him.

Nils moved over to the keys, Tom to guitar and Cindy took the lead on a restrained but emotional “Big Tears Fall.” Lovely.

The members of the touring band are the same as the album. In recording Blue with Lou, they basically moved into the Lofgren home for rehearsal and recording. At times it seems they are still there, sitting around doing the good work. There is a level of comfort with the music and each other.

“Rock Or Not” is another co-written song that gets up in your face and makes you choose a side. It has a driving bass with some kick ass guitar work. I’d definitely decide to rock.

After a delightful nod to Grin with “Like Rain,” the band punched it up with “No Mercy.” Some songs can still ignite a crowd and last night, that was it.

A little audience participation came by way of “Papa Was A Rolling Stone,” with Cindy showing how it’s done. Unexpected and fun. 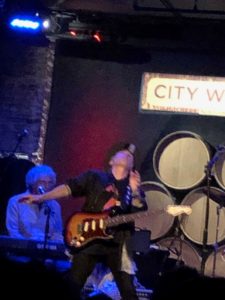 The set ended with the way this review began. “I Came To Dance” did get the crowd off their feet and Nils showed that in fifty years he hasn’t lost a step. Nicely done, there’s no way to not be smiling during this tune.

After a very brief break, the band was back on stage with an old friend. Guitarist Andy York stepped in for “Shine Silently.” A good choice for a first encore in that it settles the audience down from the fever of “I Came To Dance.” It also showcased how long Nils can hold a note. It seriously seemed superhuman.

The finale of the night paid homage to the local boy to whom Blue with Lou is dedicated. As Nils said this one was “for my friend,” the first notes of “Sweet Jane” were heard and the NYC crowd showed their appreciation. It was the cherry on top of the ice cream sundae.

As good a guitarist as Nils is, if you’ve only seen him as part of the E Street Band, it’s hard to comprehend just how extraordinary he really is. While he plays seemingly without effort, in reality it is anything but. The band is first class, and the music is as well.

The tour has a few more weeks to go. Get yourself a ticket.