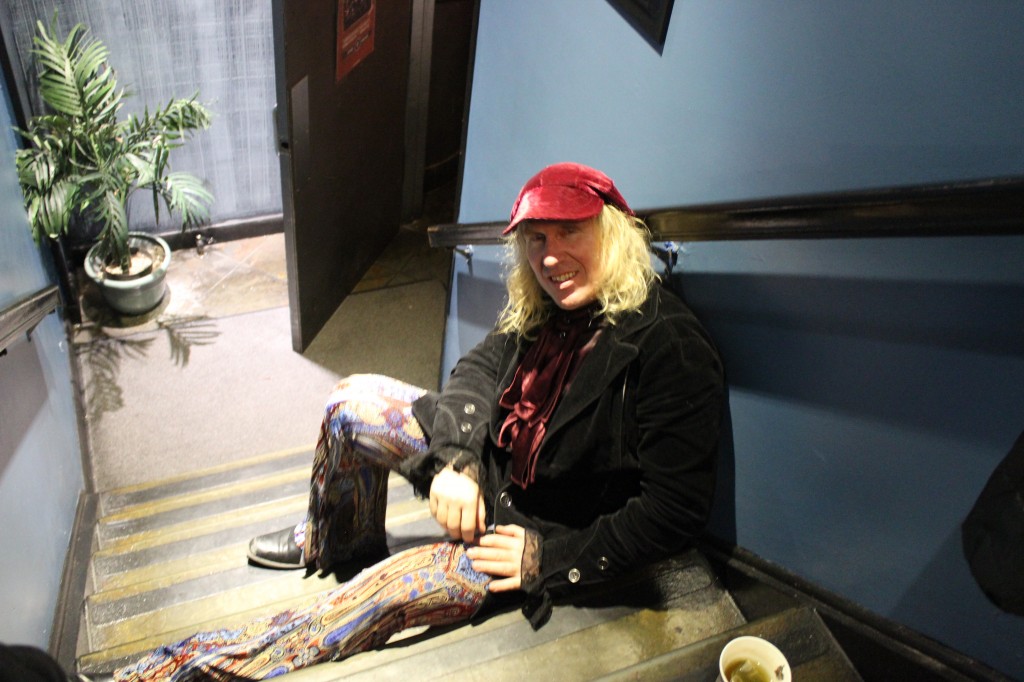 There is no question Paul Brown loves what he does. With blonde hair whirling around his head and a smile emanating from deep within, Paul Brown lets his soul bleed through the keys of his Hammond B3 organ. The result is the most delicious side dish you might ever taste. Watching him play reminds you why that instrument has been included in so much rich musical history since its creation in 1935.

Paul’s personal history is nearly as rich. The incredible positive attitude he radiates is in stark contrast with the story of his life. While living in Memphis, at the age of twelve, he and his brothers became wards of the state following the death of their mother. They were sent to live at the Tennessee Preparatory School in Nashville, where the only thing to give Paul hope was an old upright piano. That hope was later destroyed when those in charge took away his privilege to practice music. He soon ran away, eventually finding his way back to Memphis and work on the riverboats. While working as a deckhand, he continued his musical progression, adding R&B, funk, and soul to his rock background.

A chance phone call led to playing keyboards in Ann Peebles (“I Can’t Stand The Rain”) band and a friendship which endures to this day. Brown has played behind artists of every genre. At the 56th Annual Grammy Awards, Down in Louisiana by Bobby Rush was nominated as Blues Album of the Year and Paul Brown as Producer along with it. After working in the studio alongside The Waterboys, he was invited to tour with them in Europe this past year, and will join them for another tour early next year. He has also been having way too much fun working with Nashville-based gospel-blues singer Mike Farris.

I recently caught up with Paul Brown between Mike Farris shows at The Iridium in New York City, and in a casual stairway talk, I learned about the interesting life of Paul Brown. 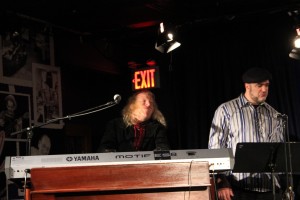 Kath Galasso: You and I have something in common, that being the love for the Hammond. Sadly, only one of us can play it. You’ve developed a unique partnership with it. What is it about the Hammond that connects to your soul?

Paul Brown: It’s the colors and the expression. When you get a great singer and you’re playing it, there’s nothing like being able to add those more subtle colors to it. Small things, because it can inspire them, just like their voices inspire me to play in certain ways.  I think that I learned that early on. When I started playing with Ann Peebles, that was really when I connected with the Hammond. She was on Hi Records and all the stuff she did had tons of B3 on it, so I really started figuring it out quick. And it’s funny cause I’m not a jazz guy, like the Jimmy Smith guys, I’ve just got a different vibe. I’m just coming from a different place. I love the more simplistic approach, and there are some things I do on there percussively that just come out of me. And somehow a lot of people have picked up on it. I’m just grateful that instrument is around for me to connect with.

You have worked with the legendary Ann Peebles and her husband Don Bryant for over twenty years. This week she is being inducted into the Memphis Music Hall of Fame along with some other equally deserving names. Among them: Carl Perkins, Big Star, Jesse Winchester and Chips Moman. Did you get to speak with Ann about the induction?

I did. Her husband called me and he was like we’d love to have you there. When he first told me about it, I thought this is incredible for her. She had a stroke and she’s coming back from it, so it would be beautiful to see this amazing resurgence from her. It’s really so her time to have that. That’s my family, I mean for real, her and Don both, that’s my family. I really want to be there for that. 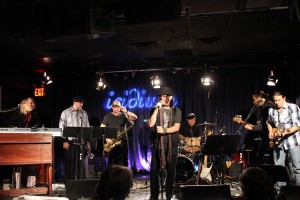 Your attitude toward producing is “Track with soul as much as purpose. Mix with feel as much as tone, and always, most definitely always Make It Special.” I think that should be taught in all recording schools because the feeling definitely seems to be missing in so much music produced today. Why do you think it’s such a hard concept to implement?

I think technology and software dictate it a lot. When I came up I had Bobby Manuel from Stax (Records) schooling me, and we were cutting on 2” tape. I think more heavy hitters are leaning more toward that. A lot of people are going back to old tape machines. And look at vinyl, it’s coming way back. So I think the mission should be, get these older guys while you still can. Get them in the schools and do workshops on the importance of analog, and the feel. Not let software dictate the feel.

That being said, I’ve been using software for a long time. What I’ve found is I apply all my analog soul to that. I can be in Nashville or New York, and everything I play is going to have this Memphis soul to it. It’s not like I’m going to go to Nashville and conform and all of a sudden do country or whatever. I think when I record, I approach it the same way. I’m always feeling that. So when I cut tracks or when I mix a record, even if mixing on software, it’s always going to have that analog approach, I’m always going to feel it like that. Some of that is hard to pass on because I’m not really schooled as an engineer. I got on the job training and what it was like mixing with Bobby Manuel, he’d be like “see how this feels when you do this.” It wouldn’t be “if you take out this frequency…” And lo and behold…. I’m sitting in my studio with a Grammy nomination. And it wasn’t like I had a big studio with assistant engineers or a guy mixing. It was just me down there in the ditches and making this happen. For me it so speaks for the little guy.

Last year you were nominated for a Grammy Award as the Producer of Bobby Rush’s Blues album Down in Louisiana. Walk me through the emotions upon hearing of your nomination.

I was in California the night the nominations were announced. And I’d been trying hard the last two Bobby Rush records and I felt that they were good enough, but man you’ve got to really work hard to reach it. So I’m sitting in this gig for the Blues Foundation, and I’m not even a big blues guy really. I’m a rock guy. I grew up on Black Sabbath and KISS. So for me to end up in the blues world anyway is a freakin’ fluke. But the thing is, if I’m going to go somewhere like that, I’m going to put everything I’ve got in it, but I’m also going to bring all my influences with me. So I’m sitting there and it’s like five minutes before I go onstage, and I looked down and it popped up on the list, and I just started bawling. I was like… no way. We were such a dark horse in the race, but it was such an affirmation to me. All the crud and the barns and the parks I lived in, it all came back. Everything that I’ve been through, and my approach to playing and my love for it. And the fact that I’ve never ended up with a jaded heart. It can happen for me and it can happen for the small guy with the small studio.

I saw the video of “Come Together” which was done at the Bobby Rush session for Upstairs at United, which was released for Record Store Day 2014. It was almost from another world. What was it like being part of that?

All the work you’ve done with Bobby has been critically acknowledged and honored. What makes your collaborations with Bobby work so well?

He’s as twisted in his head as I am. He wants to be different, he so digs being out of the norm, thinking outside the box. He just happened to run into a guy like me, who is so daring to jump off a cliff and so we jump off together. And every time we’ve jumped off, we come back and we go “wow, that was so worth jumping off a cliff for.” We’re so close, life-bros, man.

You spent a good portion of the summer in Europe on tour with The Waterboys, including playing at the Isle of Wight, and you have more work coming up with them.

The new Waterboys album drops mid-January with a World Tour following right after. Man, I thought after the rock group the Mother Station I was in, in the mid-90s, when that dismantled and fell apart, I really thought after I started playing behind artists,  that’s where my career was headed. To just play behind artists, which I’m cool with. But there’s a part of me, a band part of me, I just love so much. To be part of a band and that vibe, that feeling. Not with nine, twelve people, but four or five guys that are all for one and one for all. I love that vibe.

And all of a sudden here I am with another opportunity to be that on a great label with great PR. And they’re out of Ireland which means that I’m not just going to tour in North America, but I’m going to be all over the planet with these guys. It’s been a beautiful musical year for me, so many milestones.

You spend a lot of time on the road, so how do you balance playing live and running a recording studio?

I’m not away that much. I haven’t been but I will be in 2015. A lot of times what I’ll do is I’ll just get projects, stack ‘em up, like I’ll do a lot of B3 tracks in the studio and send them out. And you can do that anywhere. It’s just the whole albums that are going to be tricky, and I don’t see a lot of those in 2015. 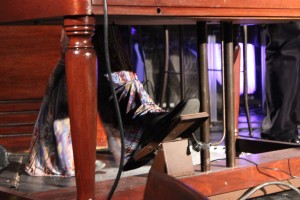 Most musicians show up for work in the studio looking like they’ve spent most of the day working in the backyard, but you’re always styling. I know some of your clothes are vintage, having belonged to some very talented musicians. How do your fashion choices affect your mindset in the studio or onstage?

It always takes me back to what I loved about going to concerts in the 70s. Even now if I go see KISS or Motley Crue, those guys are freakin’ killing it with the way they dress. So I refuse to go out like I’m mowing the lawn. I care too much about what I do, people pay great money to come see a show, I’m already giving everything I have. I don’t play the way I do because they paid so much, I play the way I do because I can’t help it. But I can certainly dress to give them something extra. And I love the colors, the colors make me feel good wearing them. And that’s my story and I’m sticking to it.