Reviewed: Tumbler, Back With ‘Come To The Edge’

When we first heard from Tumbler, the band was a family affair where they recorded an album and put a posterity stamp on their years of kitchen concerts. Richard Grace, his son Harry, and friend and record producer David Needham created She Said, which was a balanced approach to Richard’s traditional folk influences and Harry’s rock edge.

The response to She Said was positive and since they were still writing songs and singing in the kitchen, a second album seemed a logical choice. The new album, Come to the Edge, is set to release July 26, 2016 and it is a big step forward in songwriting, style and overall sound.

“Black Sheep” has an easy acoustic guitar opening and strong, clear vocal by Harry before it gets raspy and raw with a wall of electric guitar and big production. It offers a deeper sound than the first album and is a strong introduction to the new release.

“Don’t Take Much” has Richard with the vocals and while the melody is more simple in style, the sound isn’t. With parts of the song sounding like they were recorded through a megaphone, it almost sounds as if a vintage recording was reproduced bringing in modern guitar work and production.

“Falling” might be the breakout song of the album. It’s lively and has the universally understood theme of being on the edge of falling in love. With a little Tears For Fears sound, “Falling” is heartfelt, enjoyable, and how many songs can you name that reference a Pterodactyl?  Take a listen to a raw, acoustic version here.

You can almost picture the Grace boys singing “Nothing To Hold You” in the kitchen. It’s a great sing-a-long tune, more traditional in style with a hint of 50s rock and rockabilly thrown in for good measure. Check out their acoustic version.

“Winter Cold Heart” falls somewhere between a troubadour’s carol and a hymn. That is if you disregard the synthesizer. The song has beautiful harmony and the melody, a sense of urgency. Nicely done.

“Joanne” is a ballad which, according to Richard, has been around for quite a while. It’s a song of sorrow and longing, and with lines such as “There’s a beauty in widows that weep, there is peace in the eyes of the sleeping,” the lyrics are just beautiful. Needham’s production captures the heart and the sadness of the song.

Percussion takes the lead for “In Safe Hands.” The beat offers a very different sound from the rest of the album, it’s low key but expressive and provides a nice base for Richard’s vocals where the theme is one of sanctuary.

The album’s end track, “Freedom The Cry” differs vastly from the rest of the songs. It’s a little longer and while most of the album is focused on love songs, this has the feel of an anthem or protest song.  While the song has its moments, there are a lot of distractions in added sound, which makes it a little busy.

For Tumbler, Come to the Edge represents the growth and knowledge the band has gained since their debut album. The songwriting is stronger as are the vocals. They’ve learned a few tricks in recording techniques and David Needham has taken a few chances. The delight of family bonding is evident and given freely for all to enjoy. Definitely worth a listen.

Onstage review of She Said 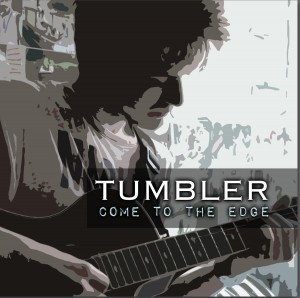