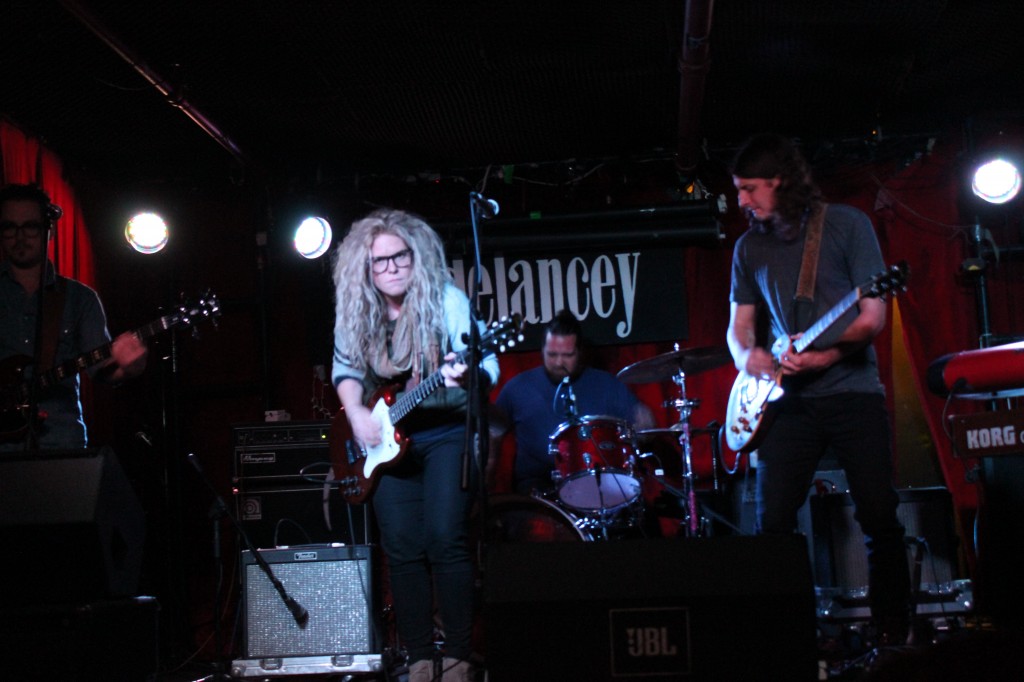 Opening up with “Bad Bad,” from their just released Adult Roommates album, Somebody’s Darling began an afternoon set of a CMJ Music Marathon showcase. The Dallas based band, featuring the bold, bluesy vocals of Amber Farris have paid their dues over the past seven years. With a heavy touring schedule as both openers and headliners, an appearance at SXSW, and now CMJ in New York, Somebody’s Darling have followed a path which offers them a sustained shelf life in a business of blink-and-you-missed-it bands.

If the new album has a different sound and feel to it credit the collaborative writing of the band, and the willingness to try every musical suggestion offered in an effort to hit that point of nirvana when you step back and say “yeah, that’s it.” The process seems to be working.

For some time now there has been a resurgence of the blues, though the form is evolving through the new blood who have taken their influences from other genres as well. Somebody’s Darling takes up the neo-blues flag and throws in a ballsy rhythm section, guitar licks refined just enough from a garage band feel to appreciate the skill behind them, and keys that punch in just when you want them to. Mix all that together, throw in those big vocals, and what you end up with is a grinding, no-holds barred southern rocking blues band. Tasty indeed.

Before their afternoon performance, I sat down with Amber Farris and bass player Wade Cofer to talk about the long road they travel. 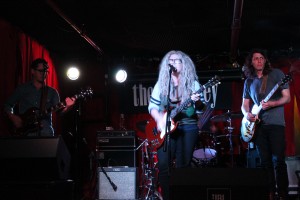 Kath Galasso: The band is from Texas, you played your first CMJ showcase last night and you’ve also played SXSW. How different is the vibe between the NY and Austin showcases?

Amber Farris: Actually I was talking about this earlier, the feel of this, and I’m not ripping on SXSW, is it’s alive. Everyone’s really involved. I feel like the bands really care about what they’re doing. The spirit of it, is a little cooler to me. The energy at CMJ is legit, everyone is really passionate about it.

Wade Cofer: I think we’ve had a better experience at CMJ than we’ve had at SXSW because it seems a bit more personal here.

The scale is a lot smaller that’s for sure.

Amber: But it’s good because you lose a lot of that at SXSW. You kind of feel like you’re a part of nothing, here I feel like I’m part of something. I feel that SX has gotten so big, there’s TV, Cooking, Music, you know what I mean? It’s not about new bands. CMJ I feel is still really focused on up and coming bands trying to break out. I like CMJ a lot, it’s been a great experience so far.

Dallas is becoming more of a music place than I was really familiar with. What’s happening there?

Wade: People who aren’t in the music business always ask me why I don’t move to Austin. But moving to Austin to be a musician is like moving to Los Angeles to be an actor. Everybody’s already doing it. You can move to Dallas and build your product in a smaller scene, and you’re still only 3 ½ hours from Austin. You can always go down and play a show any weekend. Dallas is famous for the blues, that’s where a lot of the Blues greats came from. I don’t know if you can really pin a style on Austin, there’s so many bands doing so many different things. But Dallas does have its own vibe. A lot of rock and roll is coming out of there. It’s a small scene, but it’s a good one.

Amber: A lot of rock and roll with that Texas feel behind it, that’s how I’d describe a lot of the bands from Dallas, including us. We have an undertone of Texas in our rock sound.

You’re changing your sound a little bit from your earlier stuff. Is that a natural progression or because of bringing in new band members?

Wade: I think it’s a little bit of both. We definitely wanted to go in a direction that was different than what we’ve done before, I think is a natural progression to try and do something new every time. But I do think me coming in, and I’m not saying I’m the guy that did it, but before I joined, our keyboard player played bass, and it was just a four-piece. So when I came in to play bass, that opened up the keyboard slot so he could move over to that and we could add that different element to the sound. Also, a third harmony vocal too.

And this album you’ve started to have more of a collaboration between members as far as writing goes. After writing the songs, recording the album, and listening to what you’ve done, does it give you a different perspective of how the band has grown, or is it just a statement for that time?

Amber: I think it’s a little bit of both. I think we realized we wanted our lyrics to really be, not necessarily be meaningful or a crazy poetic thing, but have a story behind it a little more. Instead of singing about getting drunk, or a broken heart, we wanted to have a little more personal history behind the music. We took time on the lyrics, I think that made a big difference in how the songs came across.

Wade: Making records is always a learning experience. You’re never gonna make a perfect record, there’s going to come a point when you just have to say “it’s time to stop.” We’re always happy with what we end up with, but there’s always a sense of, this is what we need to do better. Of what we can fix on the next record.

Amber: And the collaboration of writing, I thought brought a whole different aspect and dynamic to the band. It’s a new sound.

What’s your songwriting process like now that more people are involved?

Amber: I write most of my songs on the way to work at eight in the morning, in my head. I record them on my iPhone and I take them home and I figure out a guitar part and bring them to Dave or Mike, and they’ll do the same thing. They’ll come up with something and we’ll show it to each other, then bring it to the band and they’ll help add flair to it too. I like that, I like the band aspect.

Wade: And it may change a lot. We did a lot of pre-production on this record. Many months of trying every different scenario, almost to a fault. We tried every idea that everybody had. We’re all really open about that kind of thing. 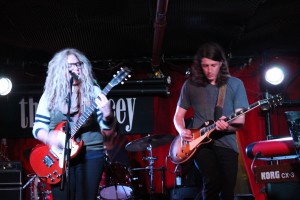 Seven years the band has been together, that’s a long time and while you’re moving up, you still haven’t gotten that big break. How do you keep that perspective of the big picture?

Wade: Personally I’d be doing it anyway. I told my parents when I was eight years old that I wanted to be a musician for the rest of my life. It’s the type of thing where it doesn’t really matter, I’m going to do it anyway.

Amber: I think we’re happiest when we’re playing shows and performing. You want it to pay the bills and obviously that’s what we’re striving for, to make this a full-time job. But we’re just happiest there. It really does take away for money factor. It’s worth the sacrifice of being broke. The name of the album is Adult Roommates, and that means exactly what it sounds like. We are adults living together, scraping by, and it’s worth it because we’re happy doing it.