The Survival Code and Broken Strings

London based alt-rock band The Survival Code are currently working on their next album. However, just for a tease, they have released a 3-song EP as a taste of things to come.

The EP titled Broken Strings is loud, fast, and raw. Gary McGuinness is a classically trained guitarist as well as a drummer. He is the energy core of the band, as lead vocalist and songwriter. Tom Cook on drums, defines the depth of the sound and was paired rhythmically on the album with “Chema Zurita” on bass.

The opening song “One,” begins with a riff reminiscent of Zep’s “Immigrant Song,” but quickly moves into a heavier metal mode. Pulsating guitar draws you in, full-out vocal that alternates between metal growl and loud whisper. The chorus stands out and balances both the hard and easy tones.

“Broken Strings,” was the first released single off the EP. It’s centered on the guitar work which is fast, a little fuzzy, and barely gets out of the way for the vocals. The melodic flow is still there but there’s a lot of sound to keep it streaming down the alt-rock path.

“Lost Cause” offers another strong tune instrumentally. It’s the slowest of the three songs, with a little more emphasis on the vocals. While it works on the verses, the chorus doesn’t have the weight to keep the song as tight as it could be.

Broken Strings is a nice appetizer The Survival Code has released as the full album gets put together. Each bite is to be enjoyed and it still leaves you hungry for another course. It’s a straight line heavy rock path with a little punk and a lot of metal. 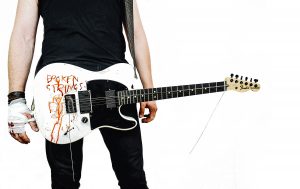