Behind the Lens with Henry Diltz and Pattie Boyd 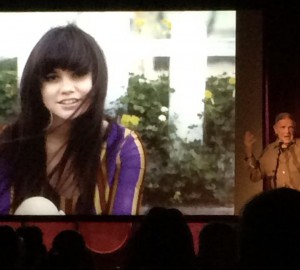 Before he became a Rock photographer, Henry Diltz used his camera to document the world he saw around him.  He would then have weekly gatherings with friends and put on a slideshow for them to see what he had captured. Decades and countless images later, he is still putting on slideshows, although now he has enlarged his circle of friends to include the generations of kids who grew up following his career as the man who shot Monterey, Woodstock, and so many of rock’s iconic album covers. 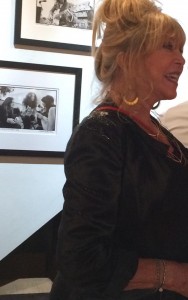 Pattie Boyd first became known to many of us as one of the schoolgirls in The Beatles” “A Hard Day’s Night.” She met George Harrison during the filming and they later went on to marry. Eric Clapton became her second husband, and both used her as inspiration in their songwriting. Harrison’s “Something” and “For Your Blue,” are both said to be written for her, as well as Clapton’s “Layla,” “Bell Bottom Blues,” and “Wonderful Tonight.” She started her photography career taking Polaroid shots of her musician friends, later moving on to become a professional photographer.

Diltz and Boyd just finished a limited national tour called “Behind the Lens” where they each offered a show-and-tell of some of their best known photographs, as well as many lesser known but equally fascinating images. They say “every picture tells a story” and it does, but to hear the story behind the story is infinitely more enjoyable.

Among the many stories Diltz told was of the first meeting of Joni Mitchell and Eric Clapton. His photo shows Eric mesmerized as he watches Joni play guitar. Apparently she was playing in a style which the guitar God had never before seen. 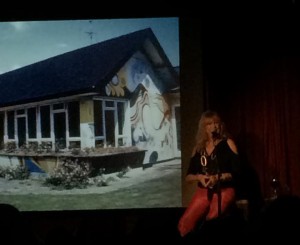 Boyd showed the colorfully painted house she and George lived in at one time, and told the story of how Mick Jagger and Marianne Faithful had spray painted a message on it saying that they had stopped by and found no one home.

Henry is an instinctive storyteller. He mixes his natural enthusiasm and joy of his craft with a feeling of awe, in that he was lucky enough to have documented so much of what was important in music during the 60s, 70s, and beyond.

I’ll admit to a certain amount of curiosity about Pattie Boyd. What was it about this woman that made two of rock’s giants fall so deeply in love, even prompting Clapton to write “If I could choose a place to die, it would be in your arms.” After hearing her describe her life through her photos and after having a conversation with her the next night at a private reception at the Morrison Hotel Art Gallery, it was easy to see. She is kind, witty, and fun. Her view through the lens was unlike any other. 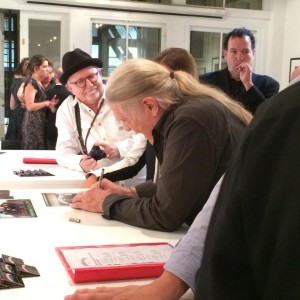 Henry Diltz and Pattie Boyd have voluntarily or not, become storytellers for a magical time in music. Their work offers a glimpse into the world beyond the photo, beyond the moment which is captured on film. While some of that history is important and shouldn’t be lost, some of it is just a joy to hear. For many of us who lived through those times, “Behind the Lens” was a trip back to when the real world was something none of us had any interesting in entering.

For more information about their photos, check out their catalogs at the Morrison Hotel Gallery: 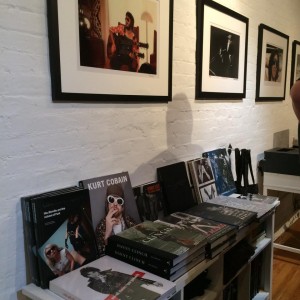