Album Review: The Easthills – Death of a Salesman 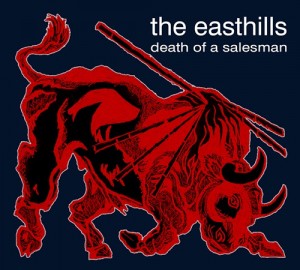 Album: Death of a Salesman

As a person who listens to a substantial amount of music, the ability to detect when a song is the product of several years of hard labor has become second nature to me. Upon listening to Death of a Salesman by Rushville, Indiana natives The Easthills, that distinct togetherness inherent only with albums years in the making crept through my core and captivated me throughout the remainder of the album. In fact, further research reveals that although Death of a Salesman is The Easthills’ debut release, the songwriting process has been in the works since 1997. The album was officially released April 16, 2013.

Interestingly, each of the songs on the album seems to represent a different portion of the sixteen year period over which they were all written. Changes in the writers’ influences are paralleled in their songwriting, often altering the styles of the songs so much that their distinct influences can be heard. This is not to say that The Easthills don’t have their own sound, but simply that their unique sound gets mixed with a variety of rock subgenres.

Due to this, it seems only fair that each of the songs should be rated individually, rather than judging the album as a whole. In order to make this more appealing, each song will have an individual rating out of ten and a brief word on what the song reminded this author of. Again, this is not to say that these songs are not original nor that The Easthills do not have a distinct sound; it is rather an entertaining way to guess what the writers were listening to when they wrote that particular track.

Reminds one of: Rockets and Cars mixed with Badmotorfinger-era Soundgarden

The album starts with a distorted tune that is the exact type of gritty, 90’s-esque rock that the music scene is missing today. “Here It Comes” is grungy, dirty, and perfect for what it tries to do. The song perfectly sets the tone for the rest of the album, preparing listeners for the mammoth choruses and swirling, reverb heavy vocals prominent throughout the rest of the album.

Reminds one of: Ozzy Osbourne-style power chords with better vocals

The second track on Death of a Salesman features a simple yet effective power chord progression, which despite being repeated throughout the whole song miraculously manages to stay fresh through several listens. By far the crowning moment of the song comes during the guitar solo in the middle, which is warbley, undefined, and cool.

Reminds one of: John Mellencamp, or at least his snare hits

It was inevitable that a song like this would appear at some point in Death of a Salesman. “Jupiter” is slow, heavy, and lumbering in a way that makes it feel much longer than it actually is. It’s not a bad song, but for whatever reason “Jupiter” just didn’t grab my attention as much as the rest of the album. However, fans of big 80’s snares and  heartfelt lyrics no doubt will find “Jupiter” to their liking.

Reminds one of: A more contained Superfuzz Bigmuff-era Mudhoney

The association with Mudhoney is actually due to two reasons; true, the song does sound somewhat like the underrated early 90’s grunge band Mudhoney, but the fact that the official video looks a lot like a Mudhoney T-shirt that I own does not help. “People Will Talk” is perhaps the best song on this album. From the chugging guitar riff at the start to the closing fade, “People Will Talk” captures the sound The Easthills are seeking in such a perfect way, it becomes impossible not to like this track.

Reminds one of: A heavier 3 Doors Down if they had been popular during the late 80’s

Another solid song, “Chuck Yeager” is the kind of danceable tune that practically forces listeners to assume the position: head bobbing side-to-side, squinched eyes, and a stiff upper left. The choruses contain just the slightest hint of a cowbell buried behind one of the most memorable hooks of the entire album. When fans share The Easthills with their friends, “Chuck Yeager” is the song they will show them.

Reminds one of: The Beatles mixed with just a dash of Motley Crue and Snow Patrol

Most of the lyricism throughout Death of a Salesman retains a high level of intellectualism, but “Hard to Feel” combines those insightful lyrics with ardent musical accompaniment in a way that reminds listeners why music is considered a form of art. Frankly, this song is beautiful. Just before the fourth minute of the song, the band forms a crescendo worthy only of being in the climax of a particularly powerful film. This is the song that will change lives; it will hold its listeners and comfort them. This is the song that distinguishes The Easthills as a legitimate act.

Reminds one of: Yellowcard minus the surfer feel

Not every song on an album should shake a listener’s core; sometimes the better option is to just shake their bodies. “Mouthkissing” does just that, luring out that jerky headbang reserved only for raw, uncompromising rock. The series of traded guitar lines in the middle of the track show off just how interesting The Easthills can make a relatively basic line sound.

Reminds one of: An alt-country Paul McCartney

Reminds one of: Audioslave without the RATM Influence

Imagine if Chris Cornell had written and performed Audioslave tracks with a band just a smidgen less heavy than Rage Against the Machine. That’s what “The Broken Indian Anthem” sounds like. It’s touching, deep, and a bit repetitive. The heartfelt guitar solo is warming, cozy, and provide relief from the questioning, occasionally unsettling lyrics.

Reminds one of: This song is purely The Easthills

This song is a testament to producer Doug Henthorn’s ability to transform a well-written song into a hit. Having worked with acts like Joe Bonamassa and Healing Sixes, Henthorn has established an impressive resume, but listening to tracks such as “Expose Myself” more fully reveals his unwavering capacity for making songs work. The opening piano riffs, the way to drums are limited in the sonic field, and even the vocal harmonies coalesce so perfectly together that its hard not to feel like “Expose Myself” has been your favorite song for years.

Reminds one of: The slow track towards the end of most Metallica albums

The last official track on the album focuses on sweet acoustic plucking, indiscriminate distorted sludge, and huge, legato vocals. “The Lamb” is that one song on most heavier albums where the band tries to balance their heavy tendencies with a lighter, delicate song. This works for bands like Poison, and it works for The Easthills, but the sense that the band would be more comfortable playing the song 20 BPM faster is present throughout the track. Still, the album has to close somehow, and at the very least “The Lamb” is an appropriate ending.

Reminds one of: Agent Orange but not quite as punk

Technically a bonus track, “Big Rhythms” is fast both in tempo and in run time; clocking in at just over a minute it is by far the shortest track on Death of a Salesman, but in content the track easily competes with the rest of the album. If The Easthills ever play to a punk/surfer audience, you can bet this song will be a hit.