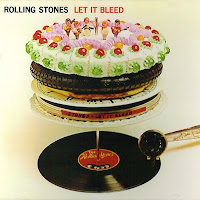 Here’s a song that we’ve visited before but never as a full song analysis. It’s The Rolling Stones seminal “Gimme Shelter,” the opening track from the 1969 release “Let It Bleed”

which was a huge world-wide hit at the time.

The song was originally recorded at Olympic Studio in London with drummer Charlie Watts, bassist Bill Wyman, producer Jimmy Miller on guiro (a hand-held Latin percussion instrument), pianist Nicky Hopkins, and guitarist Keith Richards on the basic track where Richards sang a scratch vocal track. The song was later finished at Sunset Sound in Hollywood with the addition of Mick Jagger’s lead vocals and harmonica and Merry Clayton’s soaring harmony vocals. Stone’s guitarist Brian Jones, who was still in the band at this point, was absent from the sessions.

The addition of Clayton was a spur-of-the-moment idea from producer Miller, who called in Clayton, who was still in curlers in the middle of the night. Upon returning home, she suffered a miscarriage due to her strenuous vocal performance.

“Gimme Shelter” was never released as a single, but it’s been a big part of the Stones set in concert and has been used in dozens of movies and television shows, as well as covered by a host of artists.

The movie at the end has most of the parts isolated so that you can hear what they’re playing and what they sound like, followed by the album mix version.

The Song
“Gimme Shelter” is interesting from a songwriting standpoint in that it mostly revolves around a single 3 chord pattern that repeats over and over, except for the verse, which stays on the first chord of the pattern. The form looks like this:

The solo is over a verse and chorus, with the harmonica taking the verse and the lead guitar taking the chorus. The bridge is actually just a change in the energy thanks to the solo vocal by Clayton, which is also over a chorus.

The Arrangement
The arrangement of “Gimme Shelter” seems like there wasn’t much thought given to it except for the intro in terms of song dynamics, but it still works out well.

The intro begins with a tremolo rhythm guitar followed by two tom hits (boy, do they sound good), after which Watts plays the hat against the guiro on the 2nd time through the patter. That’s where the doubled “Ooo’s” enter, as does the lead guitar playing fills. The 3rd time the pattern plays, the kick and bass enter very softly, then the bass enters playing the pedal of the key of the song (C#) at full volume over the 4rth repeat of the pattern. On the 5th time around, the piano enters, also playing a pedal note on both the left and right hands, while the bass alters it’s pattern just a bit, sliding up from the flat 7th. The 6th time is when Watts enters with the beat and the bass begins to follow the chord pattern.

On the verse, a second rhythm guitar enters, but without the tremolo, and the piano drops out or is decreased in level so it’s barely perceptible. The first and second verses and choruses are basically the same, with Clayton’s harmony and Richard’s lead guitar fills entering in the choruses.

Maracas enter at the harmonica part of the solo at about 2:00, while a guitar solo plays underneath. It’s then featured during the chorus part of the solo. The chorus continues with Clayton’s solo vocal part entering. Later in the song, a 3rd vocal harmony (presumably sung by Richards) also enters on the chorus.

At the end of the solo, the harmonica comes back for brief interlude, then the piano enters for the last verse and Clayton adds harmony to the end of Jagger’s vocal phrases. The outro after the vocals features dueling solos between harmonica and lead guitar.

The Sound
As you’d expect, the sound of the drums is very 60’s, as it’s surrounded by a lot of room ambience as the kit was probably miked with only a couple of mics. If you listen to the isolated drum track, you can hear the rhythm guitar leakage, which leads you to believe that the basic tracks might have been only drums, rhythm guitar, percussion and vocals.

One thing that jumps out is how thick and long the reverb on the vocal track is. The verb is delayed so it stays out of way of the lead vocal a bit, but there’s a lot more of it than there seems to be on the final mix. Also, notice how low the vocals sit in the mix.

Another thing that’s interesting to hear is how distorted everything is, especially Merry Clayton’s solo when she begins to belt it out.

The Production
You always hear stories about what a light hitter drummer Charlie Watts is (he’s been known to go years between snare drum heads), but that’s not true in this song and he leans into it with some muscle. His performance is very solid with great tempo, especially during the fills. Many drummers have great time except when it comes to fills, but that’s not the case here.

The percussion provides movement to the arrangement that’s subtle but very real and really pushes the song along. This is a Jimmy Miller trademark and it’s used a lot by the Stones during this period.

There are a number of “mistakes” that probably wouldn’t have been kept had the song been made today, like the last note of the lead guitar fill right as the vocal enters in the first verse (it’s a bit late), or Merry Clayton’s voice cracking during her vocal solo in the bridge. Actually, the crack really makes it seem a lot more human and paints the emotion better, but I bet most producer’s today would never let it go by and have it fixed.

Another thing to listen for is how loose the bass and drums are. Back in the days when the song was made, bands never concentrated on being tight the way we do today, going instead for feel. “Tightness” as we know it today is a concept that’s been refined over time since then. As you listen to the isolated tracks, notice that the bass and drums don’t always line up, but they never loose the feel.

Clayton’s vocal solo in the bridge is a great example of natural dynamics in a song where the performance itself is the dynamic factor. Her vocal is set up to stand out following the guitar solo, and it probably wouldn’t have seemed as intense had it been after a vocal chorus, which illustrates perfectly how important the arrangement is in the production of a song.

Be sure to listen to the isolated tracks below!