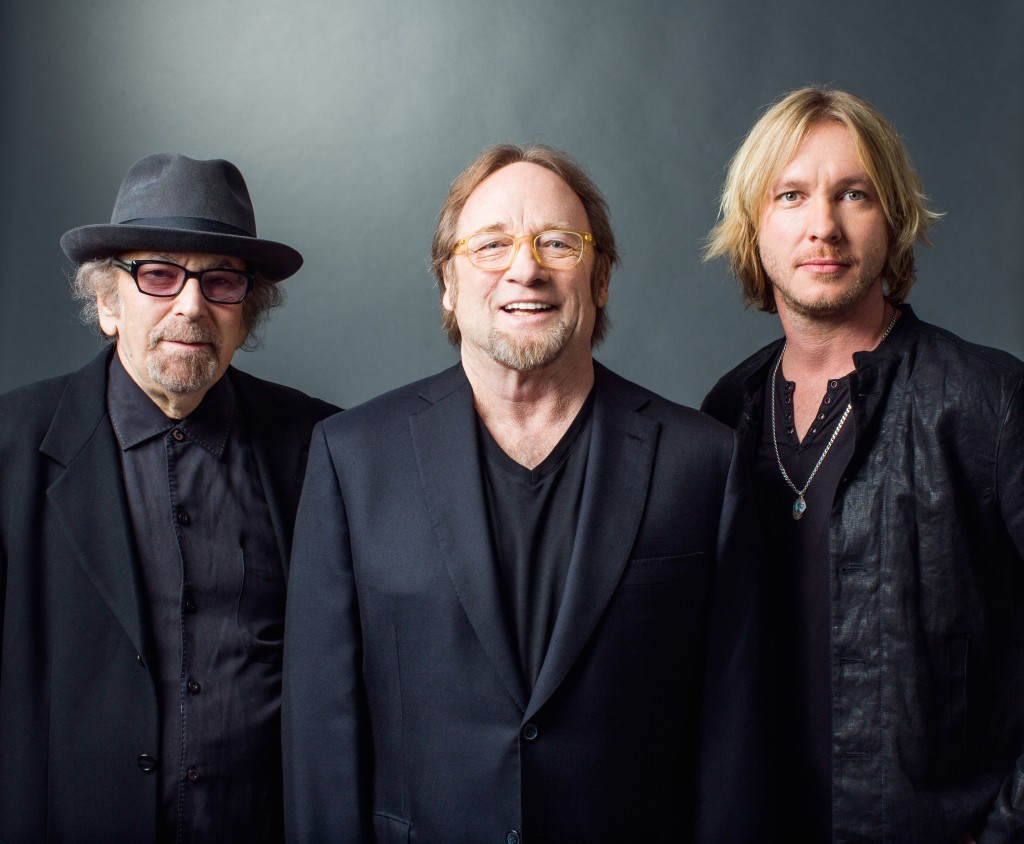 What once was a “Supergroup” is now a band, and that’s a very good thing.

Weaving together the pedigrees of Stephen Stills, Kenny Wayne Shepherd and Barry Goldberg, one would expect quality music just predicated on their varied influences and experiences in the business. That’s exactly what they delivered on Can’t Get Enough, the 2013 introduction into the band’s blues-rock sound. A mixture of covers and originals, the album was a beginning – just a glimpse into the possibilities and the artistry.

With three years in the rear-view mirror, The Rides have moved beyond being pieces of a puzzle. After a wildly successful tour Stills, Shepherd and Goldberg have transformed into a living, breathing band. A really good one at that.

Pierced Arrow, the new album set to drop on May 6th through 429 Records, is a continuation of what The Rides accomplished on Can’t Get Enough, but more layered, more complete. Masterful guitar work? Absolutely, but there’s a respect and deference between Stills and Shepherd towards each other rather than a competition between them.

Opening the album is an original with Stills on lead vocals called “Kick Out Of It,” and a kick is what you will get. It’s familiar on a beat level, lively with crisp drumming from Chris Layton. The storyline of sitting back and watching the hustling going on in the world is a universal one, but the tempo of the song keeps it upbeat.

“Riva Diva” brings a little rockabilly to the table. Another original, Shepherd takes the lead and Goldberg’s honky-tonk piano follows along perfectly. The album takes a deep breath with “Virtual World” as the pace slows, and the vocals, mostly harmonies between Stills and Shepherd, come to the forefront. It’s the closest we may ever get to hearing anything close to CSY again.

Lyrically, “By My Side” says it all. The ballad, sung by Shepherd, is entwined with guitar work to balance the story, and talks of the truth searched for in every relationship, “I can stare down anything, as long as you’re by my side.”

Bringing up the pace, Stills takes over with the more rock feeling of “Mr. Policeman.” A timeless story, one we all can relate to, and it has the feel of some of Stills earlier work.

Though not quite a cover as it was written by Barry Goldberg along with the legendary Gerry Goffin, Gladys Knight & The Pips had the hit of “I’ve Got To Use My Imagination.” The Rides cut takes more of the arrangement from the Bobby “Blue” Bland version, a lot more sultry with some sexy guitar work.

Get ready to move your feet with a little more honky-tonk in “I Need Your Lovin.” Quick paced, the piano-guitar layers along with the backing vocals of Stephanie Spruill and Raven Johnson pull it all together. The subtlety of the guitar work and the tenderness of Stills’ vocal on “A Place That I Know,” carry you on a slow but meaningful ride.

Bringing back the blues, “My Babe” pays a fine tribute to the old Willie Dixon classic and it’s a fine way to close out the album.

Pierced Arrow takes the groundwork formed with Can’t Get Enough and builds from there. It has a relaxed feel to it, a feeling of comfort within the group. That doesn’t mean there’s a lack of energy, but rather an intuition of where each is going and finding the best way to enhance that sound. The guitar work, though wonderful throughout, never feels showy or forced. It’s blues with the life stories behind it. It’s rock with the joy it should have. Pierced Arrow is like a private party that morphed into one hell of a jam session. Being able to sit in on it has proved to be well worth the wait.

Pierced Arrow available May 6th. The Rides are currently on tour. Check their website for details.