Everywhere Else on August 6th through Fantasy/Concord Music Group 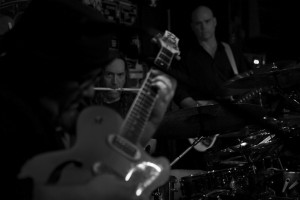 (Los Angeles) Volto!, the jam fusion band featuring Danny Carey (Tool), John Ziegler (Bubbatron) and Lance Morrison (Alanis Morrissette, Don Henley), have extended their U.S. tour, responding to an increased demand for stops following the initial announcment of their joining the iconic rock band YES at their YEStival on August 3rd in Camden, NJ.   Now, in addition to this amazing, full quadraphonic,  musical adventure, VOLTO! will also hit New York, Boston, Buffalo, Detroit, Cleveland, Indianapolis and the mighty Chicago before heading back to their home base of Los Angeles.  Before they head east, however, the band will star at two hometown ‘record release’ events; first a listening party in Silverlake on July 23rd and next a live performance on July 27th at the legendary Baked Potato, a landmark jazz club in L.A.

Volto! began when, many years ago, several highly-accomplished musicians in Los Angeles (including the drummer of GRAMMY Award winning, multi-platinum selling band, Tool) joined together for the pure pleasure of playing cover tunes in a tiny jazz club in the Valley.   First there were hard rock cover tunes, then there were the fusion numbers – staggeringly complex arrangements by Weather Report, Billy Cobham, Jeff Beck, and Tony Williams that, more so than the hard rock favorites, gave carte blanche for spirited improvisation.

As almost anyone lucky enough to have watched a Volto! show in the last 10 years knows, the real ‘experience’ is when you see them live.  Now, some of the east coast will have their chance at the Volto! experience. Together, the members of Volto! bring an energetic and even unpredictable essence to their shows, but it is the sheer precision and bravado with which Volto! performs that will leave you stunned.